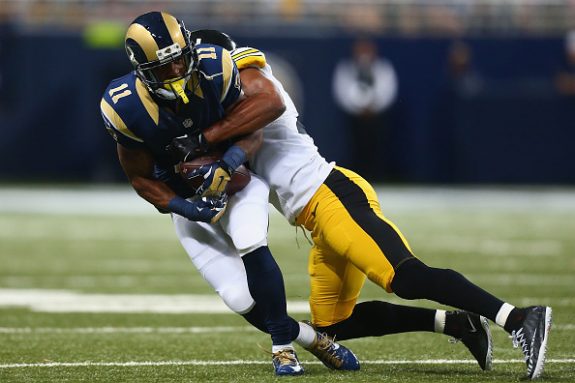 The Steelers may have won the battle in St.Louis on Sunday, beating the Rams 12-6, but in the end may have very much lost the war.

And possibly the season.

With one sack of QB Ben Roethlisberger in the third quarter the Steelers lost their franchise quarterback with that appears to be a serious knee injury. There’s no use speculating on the injury, other than to say it looks like the Steelers will be without him for quite some time – possibly the season.

Roethlisberger and the Steelers had been dominating the game in terms of numbers, but when he went down the team had just a 9-3 lead. Ben was 20-for-24 for 192 yards and an interception. He was also sacked three times.

Michael Vick was 5-for-6 for 38 yards in relief, and after a Will Allen pick at midfield was able to drive the team to a Josh Scobee field goal to make it a 12-6 game.

St.Louis had one last shot, but a 4th-and-6 play to Kenny Britt was incomplete after it was determined the ball had hit the turf when Britt came down trying to make the grab.

Le’Veon Bell playing in his first game after being suspended, had 20 carries for 62 yards with the games only touchdown. He also had a big day receiving with 7 catches for 70 yards.

The Steelers overall didn’t rush the ball very well, as they ran for just 70 yards with a 2.9 yards per carry average. The Rams had 62 yards on the day on the ground.

On defense the Steelers held Rams Foles to just 19-for-28 passing for 197 yards with an interception. He also missed a number of times to open wide out that’s bailed out the Steelers.

The Steelers offense tried from the start to go quickly and spread out the Rams, and they were able to drive down the field for a short 21-yard field goal to make it 3-0.

Bell scored two minutes into the second quarter to make it 9-0, and it appeared even after the Steelers were not able to get the 2-point conversion it wouldn’t matter.

Little did they know the fate that was coming their way in terms of their quarterback.

The Steelers will play at home Thursday against the rival Ravens at 8:30pm.

The All-Purpose Bell Is Back
Antonio Brown: Steelers Gab Player of the Game, Week 3