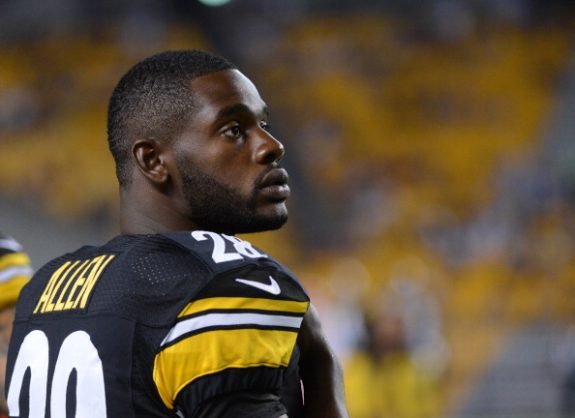 It came as little surprise on Tuesday that Pittsburgh Steelers head coach Mike Tomlin announced that the team has placed cornerback Cortez Allen on the injured-reserved list for the remainder of the season.  That allowed the Steelers to move WR/QB Tyler Murphy onto the active 53-man roster.

Tomlin said that Allen’s knee “never perked up to the level of comfort for him and for us,” forcing the Steelers’ hand.  Allen hasn’t been much of a contribution this season.

Murphy was essentially Landry Jones’ backup last weekend – should Jones get injured – taking snaps with the team in practice.  His addition to the active roster may be an insurance policy at both the quarterback position and as an additional receiver option.

Terence Garvin had knee surgery on Monday after injuring it in practice Friday before the game in Kansas City.  Tomlin expects him to be out two weeks.  William Gay is expected to miss some time in practice due to a shoulder contusion.  Stephon Tuitt will work into practice slowly, as will Will Allen (ankle sprain).  Mike Vick is expected to have limited time at practice and Antwon Blake has been recovering well from a thumb injury sustained two weeks ago.  Ryan Shazier continues to get stronger. Tomlin said on Tuesday that the team physician and training staff will evaluate the players throughout the week.

Ben Roethlisberger was held out of the game against Kansas City after his knee swelled and ached after practice last Thursday.  Tomlin still anticipates Roethlisberger will start against the Bengals, but ultimately the veteran quarterback will be a late-week decision based on his level of pain versus strength in his left knee.

“I felt good in practice, but then Thursday night it just didn’t feel real good, it kind of ached on me a little bit, didn’t sleep a lot,” Roethlisberger said Tuesday on 93.7 FM. “It was a little discouraging, but I guess that’s part of the rehab process.”