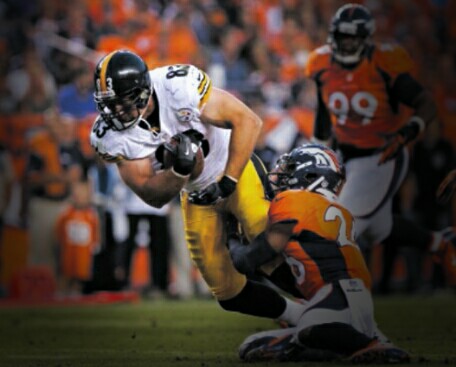 The Pittsburgh Steelers are hot right now; in a state that head coach Mike Tomlin often refers to as “arrow up”. They’re riding a two-game winning streak heading into a week 15 showdown with the Denver Broncos at Heinz Field.  The Steelers have won four of their last five games.  That is all very positive, but this team has very little room left for error. It’s time to maximize positives and nix negatives for wins.

The AFC is heating up with several teams vying for the playoffs by getting their act together in the final weeks of the season. If the Steelers hope to be one of those teams, they have to maximize the positives and minimize the negatives. The first opportunity to do so is against a 10-3 Broncos team that has done well on the road and brings a number one defense – in seven different statistical categories.

“Before we talk about any of the positive things…we just need to acknowledge how dangerous this (Broncos defense) is,” coach Mike Tomlin said Tuesday, “and for us to have a winning performance we have to minimize negativity, and the type of negativity their defense is capable of creating.”

Pittsburgh must play clean; find a way to limit penalties.  They have had some rather silly ones lately that showed a lack of discipline.  The Steelers have the fewest accepted penalties by opponents through week 14; the fewest of any other team in the league.  Continuing to stay sharp mentally is key to turning that stat into one that works in their favor.

Growth among young players is critical. All too often, young guys make errors that can negatively impact their squad. This season, the Steelers have had a healthy dose of veteran leadership that was questioned before the season began. Guys like James Harrison, Lawrence Timmons and William Gay have pushed younger counterparts Bud Dupree, Stephon Tuitt, Ryan Shazier and Robert Golden to a higher standard of play. DeAngelo Williams and Heath Miller have been examples to Jesse James, Fitzgerald Toussaint and Jordan Todman. The Steelers should keep asking for more veteran leadership when addressing issues (like communication and positioning) with those who need guidance.

Turnovers can kill a team or lift them to new heights.  The Steelers have improved their turnover ratio over the course of the season in their favor.  Ball protection is a must; they can cut down interceptions, tuck the ball on carries and have good awareness.  Creating a turnover is definitely something the Steelers need to capitalize on to help them score.  Wasted turnovers help no one.

The Steelers will determine their own fate.  It comes down to being able to have more positives than negatives.  That seems ridiculously obvious, yet they have struggled at times to see those facts. Good teams settle for accepting they make mistakes. Great teams capitalize on the mistakes of their opponents by having the mindset that they will give nothing away that could hurt them.