Alejandro Villanueva Set to Be the Steelers Starting Left Tackle 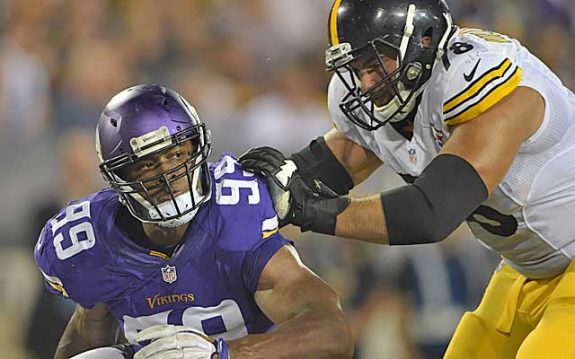 The news on the Steelers offensive line today is that former Army ranger Alejandro Villanueva is set to be named as the teams’ starting left tackle when they kickoff the season September 12th against the Washington Redskins in the Nations Capital.

The news was broken on Twitter by Mark Kaboly of the Pittsburgh Tribune-Review.

The 27-year-old has been a great story for the black and gold, going from trying to make the Eagles roster back in 2014 to now being one of the starting five on a line that will be asked to open holes in the run game and protect Ben Roethlisberger.

He jumped on the scene last season when he replaced injured left tackle Kelvin Beachum in the first quarter of a Week 6 game against the Arizona Cardinals.

The tackle graduated from The United States Military Academy at West Point in 2010 and after a short time with the Steelers rival the Bengals, he spent parts of the next four years doing three tours in Afghanistan as an Army Ranger.

Now he’s going to get a chance to get introduced as a starter on opening day for the Steelers.