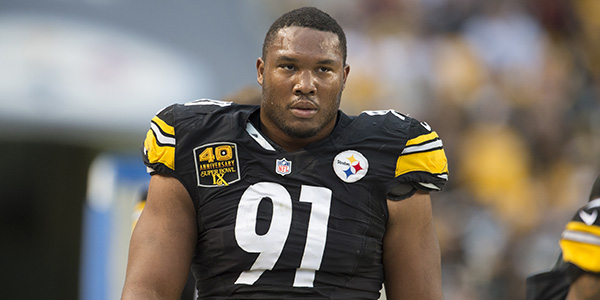 It was bantered about Sunday night that Steelers defensive end Stephon Tuitt could miss the rest of the season after it was reported he had torn his bicep muscle.

Now there’s some good news out of the possible season ending injury.

The news is that Tuitt didn’t totally tear his muscle, and he’s going to be week to week, this according to Ian Rapoport of NFL.com.

Some good news for the #Steelers. Source says DE Stephon Tuitt is week-to-week with a biceps injury. Not season-ending. “He’s OK,” one said.

Just hours after inking a new deal Sunday, he left the game against the Browns in the first quarter. He’s going to miss Sunday’s game vs the Vikings at home, and the likely the Bears game the following week, but after that it’s all going to be how quick he heals.

He’s a force on the Steelers line, which of course is why he was given a new $60 million dollar deal. He had four sacks, three passes defended, and two forced fumbles last season.