Antonio Brown is Asking for a Trade? The Steelers Should Meet His Request 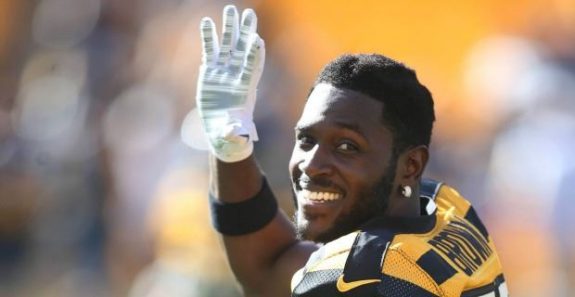 Now that the smoke has cleared on the disaster that was the 2018 Steelers season, there’s one opinion among the many out there that has to be thrown out there, and it’s one that is not going to sit well with a lot of Steeler Nation.

Antonio Brown has to go.

Yes, I know, he’s dynamic, he’s a playmaker, and he’s possibly the greatest wide out in the history of the franchise.

He’s also a cancer, and he nearly cost the team Sunday as they barley beat an awful Bengals team 16-13 at Heniz Field.

Could you imagine the outrage of the fans if the Steelers would have LOST to the Bengals, and then the Browns in the final seconds actually did rally to beat the Ravens?

Brown and his antics last week in throwing a football (reportedly) at QB Ben Roethlisberger, and then not showing up and skipping practices and meetings is yet another indication that he’s a selfish player, out for himself and doesn’t care about this team and its future.

This isn’t the incident with Brown, as there was the famous sideline tantrum in Baltimore, and even the issue with OC Randy Fichtner during the loss at home early in the year to the Chiefs.

While he’s not the first, nor will he be the last wide out to complain when he doesn’t get the ball at key times, what he has done is a slap in the face to a proud franchise that finds itself in the odd position of having so many issues they now are being described by many as a team in turmoil.

What happens over the next 30-90 days for this franchise is critical.

The players that showed up and worked hard everyday are watching as this all plays out, and if they continue to see that a diva wide out that was made the highest-paid receiver in February 2017 with a four-year, $68 million contract extension is allowed to get away with what he did last week, it will hurt the team from the inside out.

Brown needs to come out and apologize for what he did, make sure his relationship with Roethlisberger is tight once again, and vow never to make such a mockery of the team again by acting like a two-year old.

If I am the Steelers, I look to follow out on what Brown has asked, and see what compensation is available for him on the market.

The Steelers window is starting to close, partly due to the fact the division is getting better (well at least the Ravens and Browns are), and this team is going to lose a couple pieces on their offensive line and is getting older by the day.

Having a motivated Brown would be nice, but his antics of sharing tweets with players from opposing teams like the 49’ers George Kittle is not a sign that he wants to be here, and nor should the team put up with his garbage anymore.

Will it hurt to lose a player with the talent and track record like Brown? Yes.

Is it a necessary action in order to restore order and get this franchise back on track and back to being the proud team they should be?

Steelers Fall to Saints 31-28; Division and Playoff Spot in Jeopardy – Three Takeaways
Tomlin Traded? Munchak as Head Coach? Would the Steelers Ever Do Something that Crazy?