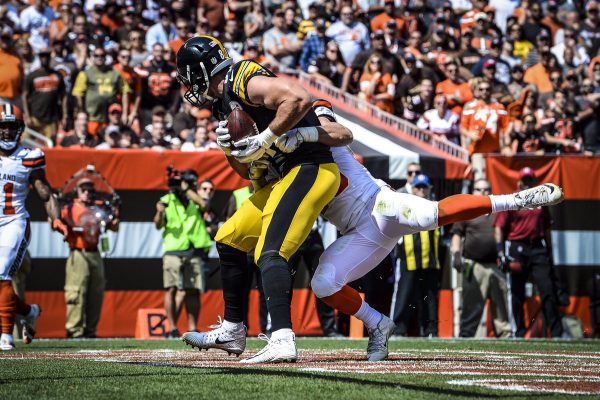 With all the focus on the Steelers dealing wide out Antonio Brown, the Steelers are set to lose another pass catcher, this time at the tight end spot.

The team, according to NFL reporter Mike Garafolo, is going to lose tight end Jesse James, as he will be inking a deal once free agency starts with the Detroit Lions.

James has been with the Steelers since 2015, and is best known for his touchdown that was brought back at the end of the debacle against the New England Patriots late in the 2017 season.

Over the last four years James has 36 starts under his belt, but most of his pass catching has been in short yardage situations, and this last year Vance McDonald came on and took most of the catches at the tight end spot.

McDonald and Xavier Grimble are the only other two tight ends left on the roster, meaning the team likely will look to draft or bring in another tight end for 2019.

Steelers Deal Antonio Brown to the Oakland Raiders, Get a Third and Fifth Round Pick
Steelers Bringing Back LB Ryan Shazier, to Be Placed on the Teams’ PUP List