Same Old Story; Brady Has His Way with the Steelers in 33-3 Beating, Three Takeaways 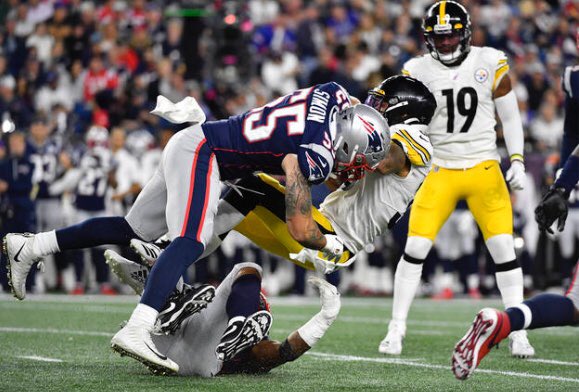 That’s one way to describe Sunday night’s disgusting effort in the opener for the Steelers in a 30-point loss on the road to the Super Bowl Champion Patriots that just never seems to have a problem in New England dominating the black and gold.

There’s plenty to be concerned about after this game, and today we take a few moments to talk about it and look ahead to hopefully a much better week two.

1. The Offense Was Putrid

With all the promise this preseason about the offense being just fine minus Le’Veon Bell and Antonio Brown, the offense looked like it might have a problem averaging 10 points a game.

There was blame to go around – from Ben not being sharp, to everyone dropping passes, to the O-line not playing well in both pass protection and trying to open holes for the run game.

Probably out of all the things mentioned the dropped passes was the most alarming. Add to that there’s still plenty of questions about who is going to step up as the number two behind JuJu, and this week ought to be very interesting as they get set for the Seahawks.

The D did a good job early holding the Pats run game in check, but just like every time the Steelers play in Foxboro, Tom Brady did whatever he wanted.

He did have some pressure on his early, but there wasn’t any real long term success in stopping him, as the future HOF QB went 24-for-36 for 341 yards and three scores.

The Steelers did record a sack, but it came so late it meant basically nothing.

The D has to get more pressure on the QB if they are going to be successful, and also the secondary looked lost and missed a number of what could have been easy tackles.

3. Throw it in the Trash

This game film needs to be watched once, and then thrown away. The Steelers as a team have had bad openers in the past, but usually do a nice job bouncing back.

Oddly enough back in 2011 when they lost in the opener at Baltimore 35-7, they came back the next week, at home against the Seattle Seahawks and pitched a 24-0 shutout.

Not saying that will be the same result Sunday at Heinz Field, but before you write the team off and jump ship, consider that it is just one game, and there’s an awful lot of talent on this team that is too proud to simply give up after just 60 minutes of football.

Look for a 100 percent better effort at home Sunday.

Steelers Name Their Four Captains for the 2019 Season
After a Sunday Night Stinker, WR Donte Moncrief Will Play Through Finger Injury