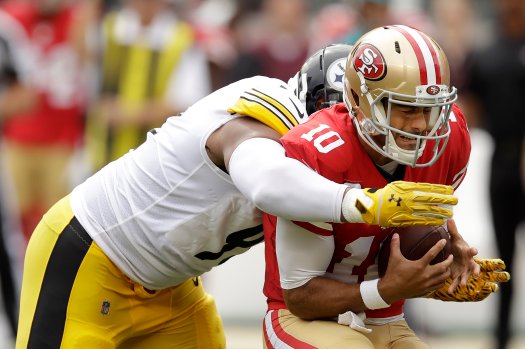 While many Steelers fans worte off the 2019 season the moment it was announced that quarterback Ben Roethlisberger was done for the season, the organization felt otherwise.

With that, the team did what they could Sunday with new signal-caller Mason Rudolph and newly acquired safety Minkah Fitzpatrick, but the team faltered late, and a huge turnover by James Conner proved to be deadly as the team fell to the San Francisco 49’ers 24-20.

It was a much better effort than the first two weeks, but the bottom line is they lost, and now at 0-3 they are in a deep hole in a division that looked winnable in August.

The defense collected five turnovers, but the offense early could only turn them into six points. The offense hit really two big plays the entire day, but otherwise it was ugly as Rudolph looked like a backup starting his first NFL game.

The team gets an extra day before they welcome the Cincinnati Bengals at home next Monday night, another 0-3 squad.

Here are a few takeaways from the four-point loss to the Niners.

New Steelers starter Mason Rudolph went 14-for-27 for 174 yards with two throwing scores and one pick that ended up being a 49’ers TD.

He looked really shaky early, and TV color-man Trent Green called over and over that the team needed to try to go downfield, but it was mostly nothing more than check downs and drop offs.

Once he did open it up, he hit two big throwing scores, one to JuJu Smith-Schuster who ended the day with three catches for 81 yards, and the other was a 39-yard score to Diontae Johnson with 10:22 left in the game that made it 20-17.

It was a very average effort, and one that needs to get better if this team is going to win games.

The defense may have collected five turnovers, but in the end they really wore down in the second half, and gave up way too many big passing plays to Jimmy Garoppolo.

It seemed like every time that the Niners needed a play to either keep a drive going or convert a score, they got it.

On the day the Niners gave up 436 yards, and San Francisco collected a whopping 26 first downs. The Niners were also 6-for-11 on third down, again showing just how much success they had against this defense.

When as an NFL team you collect five turnovers and lose, you only have yourself to blame, and on this day it clearly was the Steelers giving this game away.

The Conner fumble took all the wind out of the Steelers sails, and it was almost like when Fitz Toussaint fumbled in the Steelers eventual playoff loss to the Denver Broncos in January of 2016.

You just knew that at that point the Steelers defense, which spent over 36 minutes on the field, was going to give up the winning score – and they did.

A win would have been a monster morale and confidence boost to a franchise that needed it. Instead, it will be more questions and ‘what ifs’ for a club that looks like could have a lot of issues playing .500 ball in 2019.

Steelers Make Surprising Deal for Former Miami First-Round Pick Minkah Fitzpatrick
Steelers Get Win One of 2019; Beat Down the Bengals 27-3 to Move to 1-3