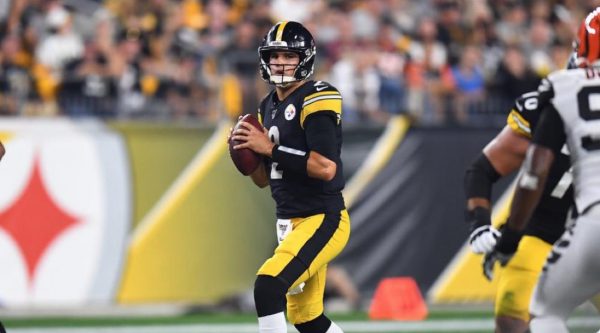 The first three seasons of the 2019 season were tough to swallow for Steelers fans.

From losing the opener in New England badly, to losing their franchise quarterback to a tough loss in San Fran, the team really needed a visit from their buddies in the AFC North in the Cincinnati Bengals.

Monday night the Steelers came out of their shell, playing both the best football of the year on both offense and defense, as they pounded Cincinnati by a final of 27-3.

The win puts the team at 1-3, but with the Browns win in Baltimore Sunday suddenly the Steelers are just a game out of the top spot in the division.

With a battle with the Ravens on Sunday looming, here’s a look inside the much needed Monday night win at Heinz Field.

How about that outing from Steelers QB Mason Rudolph, who at one point hit 11 straight passes in the win.

He was careful, not turning the ball over, but more importantly he took what the Bengals gave him on defense, throwing the ball short most of the night but also hitting the big throws when needed.

Mason hit a pretty 43-yard TD to Dionte Johnson who got free to push the score to 24-3.

Maybe his second best throw was a nifty scamper that saw him eventually hit tight end Nick Vannett for 17 yards on a 2-and-15 from the Cincy 40.

If Rudolph can duplicate these types of outings moving forward, all is not lost for this Steelers team.

2. Breakout Night for the D

The Steelers defense allowed a field goal after a fumble midway through the first quarter by Johnson, but didn’t give up another point the rest of the night.

Between that time, they put tremendous pressure on Andy Dalton, stuffed Joe Mixon for the most part, and didn’t give up their usual Steeler famous broken play.

The other key was that the Steelers got off the field on third downs for once, and even on 4th down Mark Barron got a pick in the end zone.

Again this is the type of effort they will need against the NFL’s new wonderboy in Lamar Jackson and the Ravens Sunday.

Yes the win against the Bengals means the Steelers are just one game back, but at the same time all those warm and fuzzy feelings will go away quickly if they lay an egg against The Ravens.

You figured that this team was going to have growing pains last week in San Fran, and they should have won that game but instead gave it away.

Rudolph over the last six quarters looks like a different QB, and the defense clearly needed this type of outing against a bad Bengals offense.

Likely over the next few weeks against the Ravens, Chargers and even after the bye against Miami we will see what this D is really made of.

Steelers Falter Late, Drop to 0-3 Following 24-20 Loss to 49ers
Mike Tomlin to the Redskins? It’s a Rumor that’s Likely Not Worth Even Discussing