Steelers Open as Big Favorites Against the Dolphins; But Can’t Overlook Miami on Monday Night 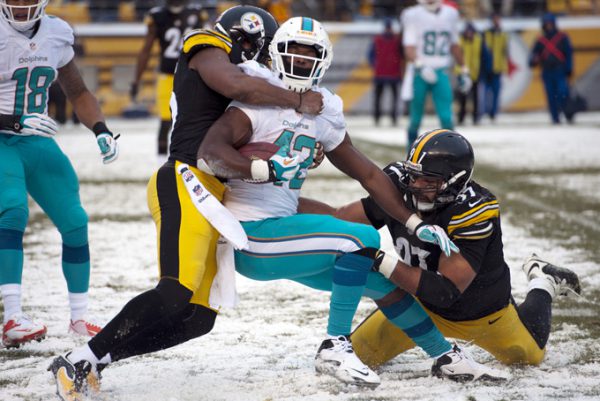 The Steelers and Dolphins have had some interesting games in their series history, including a Monday night football 3-0 game back in the first season for head coach Mike Tomlin in a mud soaked field in Pittsburgh.

This Monday the teams will go at it again, and using a pointsbet promo code you can lay the odds on the black and gold, who will enter the game as big -14.5 (-110) line against the spread (ATS).

The point spread for this one is pretty simple. The Dolphins are downright awful, while the Steelers, while they haven’t played up to the potential as a whole, have at least won a pair of games over the Bengals and Chargers.

The two clubs have not played since a cold frigid playoff showdown at Heniz Field back on January 8th, 2017.

That day belonged to not only the Steelers offense, but also to a hard-hitting defense which made for a long day for Miami starter Matt Moore, who was sacked five times for minus 39 yards.

The offense on that day was led by Ben Roethlisberger who threw just 18 times for 197 yards with two touchdowns and two picks.

Antonio Brown was the human highlight reel, going for two catches for scores in the first 8:10 of the game to give the Steelers an early lead they would never lose. The scores covered 50 and 62 yards in the victory.

It was the first win for the Steeelrs over the Fins since a game back in October of 2010, a day when Roethlisberger and the team got a favorable call late that many felt should have gone the other way.

Instead, it was a Jeff Reed field goal with 2:36 left that put the Steelers up by a point in the win.

The Dolphins beat the Steelers in a snow game at Heinz Field back on December 8th 2013. Ryan Tannehill and the Fins played nearly a perfect game in the snow, and did enough to best the Steelers that day by a final of 34-28.

The other game in the series since 2010 was a game in which the Dolphins buried Roethlisberger, forcing him out and to the surgical table to have knee surgery.

That day it was the Fins with a big home win, as they beat the Steelers rather soundly by a final score of 30-15.

Monday likely won’t be an ESPN Classic by any means, but the Steelers have to protect themselves from being upset by a team that has not won a game yet in 2019.