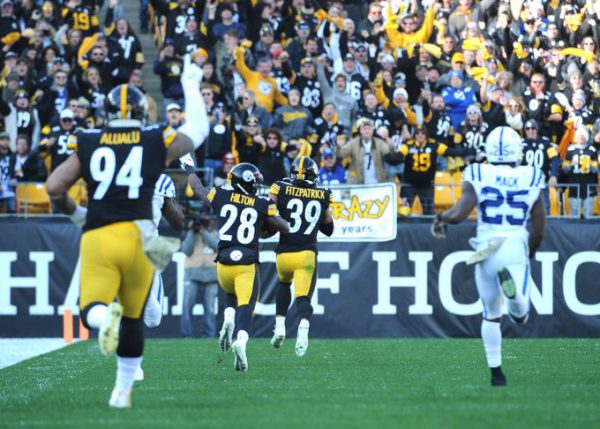 Much like a few weeks back against the Ravens, Steelers fans were holding their breath as Colts kicker Adam Vinatieri lined up for a 43-yard field goal that more than likely would have sent the Colts to a one-point win over the Steelers.

This time, the ball sailed the Steelers way, as Vinatieri’s kick sailed way wide left, sending the black and gold to a 26-24 win, and more importantly back into the playoff picture in the AFC as they now sit at 4-4 on the season.

The win comes with so many ups and downs it’s almost hard to believe that the Steelers actually won this game. The Colts got a couple key calls in their final drive that many felt would put them in a position to win the game, but on this beautiful Sunday at Heinz Field, the football gods had other plans.

Here’s a couple quick takeaways from this two-point Steelers win as they look ahead to the Rams in a late afternoon game next Sunday.

In a game that came down to the wire, the Steelers got a huge late gift on the final play of the first half that gave them three points which made it 16-13 at the half in favor of the Colts.

The play was a personal foul by the Colts as Vance McDonald was stood up and eventually was hit helmet to helmet hit by Darius Leonard which gave the Steelers 15 yards and an untimed down.

Chris Boswell nailed a 51-yard field goal that could have been good from about 60. The kick was clutch for a guy that has been near perfect after a horrific 2018.

The three points loomed even bigger when you look at the final score, and the lack of discipline for the Colts cost them.

Minkah Fitzpatrick already is making a huge impact for the Steelers just a few games into his black and gold career, the biggest Sunday to make it a 10-10 game.

With the Colts driving, Fitzpatrick read the eyes of Colts QB Brian Hoyer, and intercepted him at the three-yard line, and he quickly raced 96 yards to tie the game.

Fitzpatrick already has the most picks for a Steelers defensive back since 2010, and by the way he’s done that in only a handful of games.

How do you feel about giving up that first-round pick now? As it stands, this is a player that looks more than worth it.

The Steelers QB was okay, but it still feels like he needs to start games faster, which Mike Tomlin stated after the win.

Watching him throw a pick on the first possession was frustrating, though this time around it was more on JuJu Smith-Schuster for getting a pair of hands on it, only to have it bounce in the hands of the Cots Kenny Moore II.

On the day, the Steelers QB went 26-for-35 for 191 yards with a pick and touchdown to Vance McDonald. The average on his passes was just 5.5 yards, and again there is going to be questions as to why he’s not throwing the ball more downfield.

To pound home the point about the short passes, the Steelers leading wide out was running back Jaylen Samuels, who caught a crazy 13 passes for 73 yards.

Again this is an offense that needs to go downfield more. The good news is this gripe comes in a winning effort.