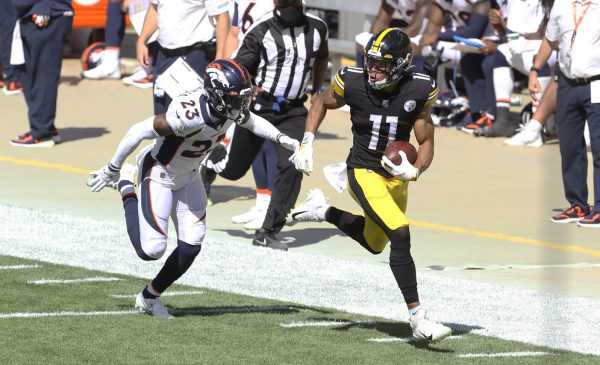 Sunday afternoon in front of no fans at Heinz Field, the Steelers took care of business in rather ugly fashion against the depleted Denver Broncos 26-21.

The game came down to four keys plays in the final two minutes, two stops by the Steelers defense on 3rd and 4th down, and then a six-yard run by James Conner, followed by a 59-yard run that put the game away.

In the end the game probably shouldn’t have been as close as it was, as the Steelers had chances to put the game out of reach, but an ugly turnover by Benny Snell opened the door for Denver to challenge to steal the game in the final minutes.

It’s the first time since 2017 the Steelers are 2-0, and the team has a shot for 3-0 a week from today as they play host to the 0-2 Houston Texans, who were blown out at home by the Baltimore Ravens.

Here’s a couple takeaways from the Steelers win push their mark to 2-0, keeping pace for the time being with the Ravens.

1. Bend But Not Break

The defense on that final drive allowed enough yards for a number of Steelers fans blood pressure to rise, but let’s face it, when they need two plays to close out the game, they got it.

Mind you it was against Broncos backup Jeff Driskel, but let’s not forget in the past the Steelers have lost home games to the likes of Bruce Gradkowski (Raiders) and Mike Glennon (Buccaneers).

Denver got the Steelers 15-yard-line at the two minute warning with a third-and-two on the line. In the shotgun Driskel’s pass was incomplete as he tried to get it to K.J. Hamler.

That set up fourth down, and the Steelers brought the heat, and safety Terrell Edmunds came unblocked for a huge 11-yard sack on Driskel to end the threat.

On the day Denver had 319 yards to the Steelers 410, and Driskel was sacked six times as the Steelers brought the pressure.

The Broncos were just 1-for-4 in the red zone, a huge stat that saved the game for the Steelers. Both teams had a pair of turnovers, but overall it was that defense coming up with two huge plays to save the game.

2. The Run Game Has to Be Better

James Conner getting the start was a bit of a shock based on his ankle injury and the way that Benny Snell ran the ball against the Giants, but something tells me that Snell didn’t have the best of weeks at practice.

Conner went for 106 yards on 16 carries with a touchdown, but there were times during the five-point win that he disappeared and you wondered what happened.

Overall the Steelers did rush for five yards a carry, but it was overall an inconsistent effort from the run game, and the other big thing that has to be addressed is Snell’s fumbling issues.

Snell has coughed up the ball twice in two games, and while JuJu Smith-Schuster dove on the ball last week to save the turnover, this week the Steelers were not so lucky, as Snell’s fumble was picked up by the Broncos.

Going back to last season, Snell has now fumbled in four of the last five games, and that cannot be tolerated, more so when you’re trying to put the game away.

Conner getting 16 carries was a surprise, to just three for Snell, and Ben Roethlisberger had three carries for minus two yards.

One other key was that the Steelers were playing with a banged up offensive line, missing a couple big name players in David DeCastro and Stefen Wisniewski.

Taking their place was right tackle Chuks Okorafor and rookie guard Kevin Dotson, and both seemed to play well.

Let’s see the game plan next week against a Houston team that was torched by the Ravens run game on Sunday.

3. Breaking Down the Pass Game

Two weeks in and the Steelers pass game saw Ben Roethlisberger throw the ball 41 times, completing 29 passes for 311 yards and two touchdowns with a pick.

Looking at the numbers, Dionate Johnson got the most chances, and it seems he still has the problems making catches. Ben went his way 13 times, eight times Johnson did make grabs for 92 yards and as score.

Rookie Chase Claypool had a solid second game, making a great grab and run for an 84-yard touchdown and ending the game with three grabs.

JuJu Smith-Schuster had seven catches for 48 yards, and James Washington saw five targets, three of which were complete for 22 yards.

Ben’s first two games have been impressive based on the expectations that have been placed on him, and while in the postgame he said that he wasn’t happy with how he played, a win is a win, and you have to give credit to the QB for leading the team to two wins.

Ben Roethlisberger Comes Through Monday Just Fine, Ready for a Challenge in Week Two
Steelers Lower the Boom on Watson and the Texans, Move to 3-0 with 28-21 Win