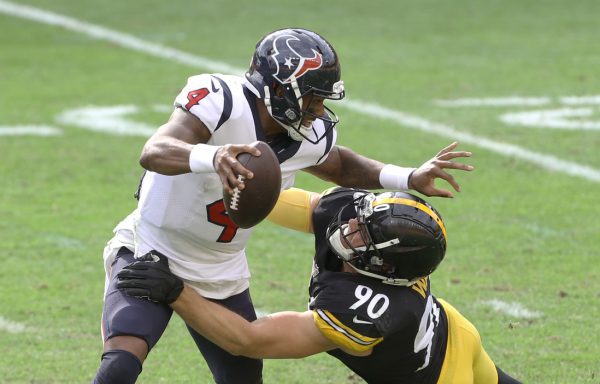 For the first time since the season they last went to the Super Bowl, the Steelers have started the season with a perfect 3-0 mark.

Sunday at home against the Houston Texans, the Steelers overcame an early 14-3 deficit, putting up 14 points before the Texans took a late lead 21-17 at half.

The second half though belonged to the Steelers, as their defense beat down Texans QB DeShsaun Watson and the Texans offense, and the Steelers run game took over, led by James Conner.

It wasn’t a thing of beauty by any means, and there’s no doubt that the Steelers are going to have to play better in Tennessee against the also perfect 3-0 Titans.

Here’s a couple things from Sunday’s win as the club starts to look ahead to playing in Nashville next week.

1. Defense Lowers the Boom in the Second Half

51 yards and two first downs. That’s all the Texans offense put up in the second half after a first half in which it looked like they could not be be stopped.

The Texans second half drives went like this – punt, punt, interception, punt. They put up three plays on three of the four drives, and the drive that ended with a pick they went eight plays.

The Steelers put the rush on DeShaun Watson, not allowing him time to get comfortable in the pocket, and also making sure when they got hands on him to bring him down.

Give Keith Butler and Mike Tomlin a ton of credit for making adjustments at halftime that didn’t go unnoticed.

The Texans played the game in a desperate manner not wanting to fall to 0-3, but the Steelesr defense and the run game would not let it happen.

2. The Steelers Figured Out They Could Run

The Texans run defense was burned badly in the first two games, and it took the Steelers awhile but they figured out they could run the ball and do it well.

Conner put up 6.1 yards per carry, while rookie Anthony McFarland Jr. had 42 yards putting up seven yards each time he touched the ball.

It was great to see the Steelers impose their will in the run game, and it also took a lot of pressure off Ben Roethlisberger, who made a couple key throws in the last drive to run out the clock.

If this team can continue this style of running against the Titans, they can be sitting at a perfect 4-0 four games into the season.

It has been a topic of conversation this week about the Steelers getting the ball to the tight ends and the ball to the playmakers, and Ben Roethlisberger did that in the win.

Eric Ebron finally made an impact, leading the team with five catches for 52 yards and he scored on a nifty touchdown grab.

After that it was JuJu Smith-Schuster and James Conner with four catches each (Ju Ju had 43 yards, Conner with 4) and James Washington had five catches for 36 yards.

It was Ben at his finest spreading the ball around, and after yet another tough start on offense the team finally hit their stride in the second half and were able to get the win.

Steelers Top Broncos 26-21 in Home Opener; Three Takeaways from the Victory
Game On, NFL Says Steelers-Titans to Go On As Planned Despite Outbreak in Tennessee