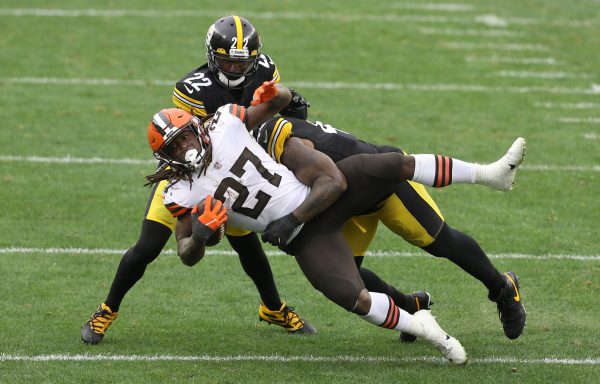 For quite a few Steelers fans, many were not even out of the womb yet, but for those that were, they remember a start for a team that eventually went 14-2 and beat the Dallas Cowboys 35-31 in Super Bowl XIII.

Will the 2020 Steelers reach such heights? No matter how you look at it, they will have one thing in common with that 78 squad, that being they are also 5-0 after Sunday’s dominating win over the loud mouth Cleveland Browns, 38-7 at Heinz Field.

Many felt this game would be a coming out party for the “new look” Browns, a team that came into Sunday on a four-game win streak, and firing on all cylinders after impressive wins the last two weeks over the Cowboys and Colts.

A lot of so-called “experts” that the Steelers hadn’t played a good team yet, and their run defense would be exposed and Browns pass rusher Myles Garrett would make it a long day for Ben Roethlisberger.

Instead, the Steelers D dominated Baker Mayfield, doing enough for the Browns coaching staff to finally pull him from the blowout near the end of the third quarter.

As they have all season, the Steelers took the win in stride, knowing there’s a lot of football left, starting with another five-star matchup next Sunday in Tennessee against the 5-0 Titans, who won Sunday in OT against the rival Houston Texans.

Here’s a couple quick takeaways from the Steelers 31-point win and what’s next for the black and gold.

All week long it was about Myles Garrett and how he’s such a force on the Browns defensive line and how he was gonna make it a long day for Big Ben.

Instead, Roethlisberger could have made a sandwich on some plays he had so much time to throw, and the Steelers did an excellent job on Garrett, who officially was credited with four tackles and he had one of the two Browns sacks.

Anyway you look at it, the Steelers made Garrett very pedestrian for the most part, as he didn’t do much in either the run or pass game, and it was Bud Dupree along with T.J. Watt who should have the Monday headlines for the way they beat up Baker Mayfield and the Browns rushers.

2. The Trenches Belonged to the Steelers

In this year of non-stop offense, it was good to see the Steelers go back to old-fashioned beat down football, winning the game on the offensive and defensive lines.

The offensive line opened up holes all day for James Conner, who ran for 101 yards on 20 carries with a score, an average of 5.1 yards per carry.

Overall the line helped the rushing game 129 yards on 39 carries, helping the Steelers run clock once they built a huge lead in the second half.

On defense, they held the Browns rush game to just 75 yards on 22 carries, this after the Browns had built up a rep as one of the best rushing teams in the league over their four-game winning streak.

Kareem Hunt was held to 40 yards on 13 carries (3.1 yards per carry), and D’Ernest Johnson, who had a huge game two weeks back against the Cowboys, ran for one yard on four carries.

Stopping the run game put all the pressure on Mayfield, and the end result saw the pass rush beat up the Browns overmatched O-line all day.

Okay, let’s be honest, most of you (myself included), felt that the Steelers were going to be 5-0 after today, of course I didn’t see it being a 31-point win, but it was fun to see the black and gold lay a massive beat down on their rivals.

Now that it’s over though, the team has a couple huge road tests ahead, and staying undefeated is going to be very tough to say the least.
‘
The first test is a matchup that should have happen two weeks ago, as they finally now will head to Tennessee to take on the Titans, who are also undefeated.

Then it’s a road matchup with their biggest rival, the Ravens at M&T Bank Stadium. The Ravens have lost at home in 2020, falling to Pat Mahomes and the Chiefs.

After that the team heads to Dallas, taking on a Cowboys team that has a lot of struggles on defense, but eventually many think will figure it out and are still the most talented team in the NFC East even minus Dak Prescott.

Getting out of these three games 2-1 is probably the best anyone could ask for, setting the team up at 7-1 as they then host Joe Burrow and the Bengals November 15th at Heinz Field.

It’s been fun so far, but to assume things will be as easy as today is asking a lot, but we shall see how things keep playing out with the Steelers.

The Day After: Thoughts on the Steelers After Beating the Eagles, Moving on to the Browns
Five Most Memorable Games in the History of the Rivalry Between the Titans and Steelers