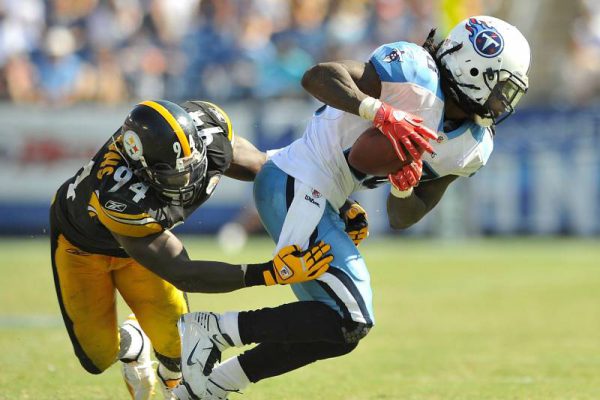 It’s a rivalry that isn’t the oldest in the National Football League, but one that if you add in the fact the two teams played in the same division for years, the Titans and Steelers always have intense games when they take the field.

The Titans have been in Tennessee since 1997, prior to that they were the Houston Oilers, another team that the Steelers simply didn’t get along with.

The two teams played in the AFC Central for years, meeting in a pair of AFC Title Games in the Steelers late 70’s Super Bowl runs.

Today we go back in time and relive some memories of this rivalry as the teams get ready for their huge undefeated battle Sunday in Nashville.

Here’s five games that have defined their rivalry since the Oilers moved from Houston to Tennessee back in 1997.

Opening Day 2005 at Heinz Field saw the Titans come in to take on the Steelers, who the previous season went 15-1 and lost to New England in the AFC Title Game. Tennessee with Steve McNair got off to a fast start and a 7-0 lead, but rookie Heath Miller caught his first NFL TD, and the Steelers were off and running.

Led by undrafted free agent Willie Parker, playing for an injured Jerome Bettis and Deuce Staley, the back ran for 161 yards on 22 carries with a long of 45 yards and a score in the eventual 34-7 win.

The defense got to McNair for three sacks and a pick, and the sunny opener at Heinz was the start of a somewhat surprising Super Bowl run that ended with a fifth Lombardi in Detroit.

Playing at old Three Rivers Stadium the Steelers got off to a quick start with newly installed QB Kordell Stewart playing the role of spoiler, throwing for a touchdown, rushing for two, and passing for 244 yards in a runaway 37-24 shootout.

The Steelers run D held Eddie George to just 29 yards, while Jerome Bettis ran for 74 yards on 18 carries in the win.

The offense for the black and gold put up 399 yards in the win, holding the Titans to 284 yards, just 58 on the ground.

The Steelers were coming off a win in Super Bowl XLIII eight months prior, and were set to open the season against the Titans at Heinz Field.

The game can be remembered for a couple plays, the one that to this day people talk about is the one-handed interception by Hall of Famer Troy Polamalu.

It was a low-scoring slugfest that came down to free football, as the game went into overtime before the Steelers finally put a drive together to allow Jeff Reed to kick true a 33-yard field goal for a 13-10 win.

The battle in Nashville in 2010 came about as a week two affair, a game that saw the Titans favored with wonderkid Vince Young in the starting lineup as the future of the QB spot for Teneessee.

The game though is remembered for an opening kickoff by then unknown rookie Antonio Brown, who went 89 yards for a score, a fight featuring Hines Ward and a bunch of Titans players, and Troy Polamalu jumping over the pile to stop Kerry Collins who took over for Young in a perfectly timed play.

The Steelers managed just 127 total yards of offense, but their defense led the way, as the black and gold went on to start the year 2-0 with a big 19-11 win.

The only playoff game between the two rivals took play in the AFC Divisional Playoffs in the 2002 season, played in January of 2003 in Nashville.

The Titans were favored, and early on it looked like a runaway, as Tennessee led it 14-0 after two first quarter touchdowns.

Then the Steelers offense led by Tommy Maddox finally got on track, scoring a touchdown on a pass to Hines Ward from 8 yards out, and two Jeff Reed field goals made it 14-13 at half.

Early in the third quarter a hit on Eddie George caused a turnover, and the Steelers took their first lead on a Amos Zereoue 31-yard run just 23 seconds into the third making it 20-14.

Tennessee scored the next two TD’s, then the Steelers got another score from Ward with a two-point conversion making it 28-28.

The teams traded field goals sending the game into overtime, where the memorable moment that Steeler Nation balked at took place.

First before Titans kicker Joe Nedney lined up to attempt the game-winning field goal, the stadium was beset by a bunch of professional fireworks, that likely were just set off too early, causing a massive distraction.

Nedney then attempted a 31-yard field goal, only to see it go wide, but Steelers CB Dwayne Washington was called for running into the kicker, thus giving him yet another chance, this time from 26 yards.

The call was legit, but Nedney did a great job of acting, even more or less stating so after the game was over.

It was a heartbreaking way to end the season for the Steelers, and the Titans lived for just another week before losing to the Raiders in the AFC Title Game in Oakland.

Steelers Bring the Pain on Mayfield, Browns in 38-7 Win to Move to 5-0
Thoughts on the 6-0 Steelers; Huge Test Sunday, Failure to Finish, Defensive Letdowns