Seven Memorable Games In the History Between the Steelers and Jaguars 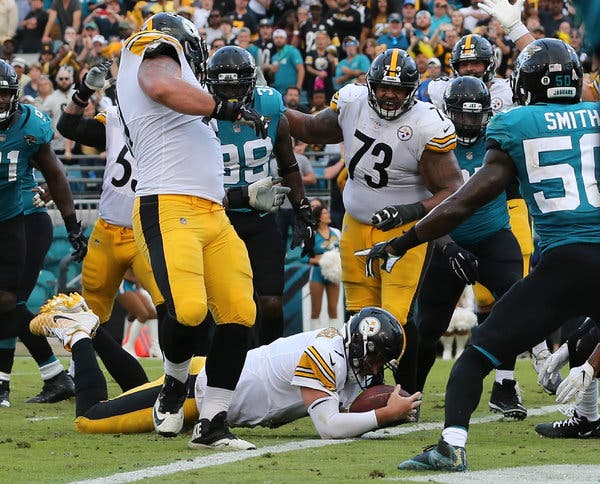 There are not many teams in the NFL that Steelers fans truly dislike, the Ravens, Bengals, maybe even the Cowboys have to be on the list.

Another team though that has to be on the list is that of the Jacksonville Jaguars, a team that since they came into existence in 1995 has been a thorn in the side of the black and gold.

The two teams have played 26 times over the last 25 years, and the Jags have the lead in the all-time series 14-12, including two playoff wins at Heinz Field.

Today as we get set for matchup 27 this Sunday in Jacksonville, we take a look at seven of the most memorable games between the two squads.

Let’s start this countdown with the first ever meeting between two teams that would wind up being heated foes.

The Jags were 1-4 entering the October 8th affair in Florida, and they totally outplayed the Steelers, who seemed shell shocked and not prepared for the black and gold.

The only memorable Steelers moment was a touchdown from little remembered fullback Steve Avery, who scored one footed on an 18-yard touchdown pass from Neil O’Donnell to cut into what was a Jags 14-0 lead.

From there the two teams traded field goals, with the Jags D doing enough to stop O’Donnell and the Steelers offense to win the game in what was a massive upset at the time.

The Steelers were already sitting at 10-1 when they went down to Florida to play the 6-5 Jags on a Sunday night, and were :18 seconds away from their second loss when Jeff Reed connected on a 37-yard field goal to secure the victory.

While early still in Ben Roethlisberger’s career, it was an early gut check for the QB, who led the team on a final drive to overcome what had been a 16-14 deficit to set up Reed with the chance for the game-winning kick.

The 13-3 Steelers were poised to make a Super Bowl run after having a week off as the #2 seed in the AFC, but instead were punched in the mouth by a Jaguars team that earlier in the season had handed them a loss that they promised wouldn’t be a repeat.

They were right to a certain extent, as the Jags didn’t just repeat the win, they made it even worse for Steeler Nation, who had to watch as their defense was torched for 378 yards, with running back Leonard Fournette going for 109 yards on the ground.

The 1pm start saw the Steelers sleep walk while falling behind 21-0 early in the second quarter. They finally started to rally, and from the moment T.J. Yeldon scored to give the Jags a three touchdown lead, they went on a frantic pace, putting up over 500 yards of offense as they tried to rally.

THe Steelers got it to 28-21 and 42-35 before the Jags did just enough in key moments to put the game away, sending the Steelers home in stunning fashion to this day they still have not forgotten.

The Steelers and Jags were at the peak of their rivalry, going back and forth in a Sunday night affair that saw Hines Ward pull in an 8-yard touchdown pass in the final two minutes to secure a hard fought win.

That final drive saw Ben Roethlisberger make some big plays, including the pass which Ward caught with his finger tips.

The defense, which was just starting to round into form in their Super Bowl season, stopped the Jags in their final drive, securing the win to put the team at 4-1 on the season.

The Steelers D held the Jags to just 213 yards, while the Steelers offense amassed 415 yards, holding the ball for over 33 minutes.

1997 was a magical year for the Steelers, as they made it to the AFC Title game before falling to HOF QB John Elway.

Two players who defined the magic of the season were QB Kordell Stewart and RB Jerome Bettis. They combined for the winning score in overtime on a shovel pass that saw Bettis score from 17 yards out to seal the win.

The Steelers held the ball for over 41 minutes, and Bettis rushed for 99 yards in the win, with Stewart throwing for 317 yards and two scores, putting the team at 6-2 atop the division.

A playoff game that nearly saw the Steelers rally from down 28-10 to start the fourth quarter, instead a controversial no-call on a fourth down play allowed the Jags a huge first down that eventually allowed them to kick a field goal to win the game.

Down 28-10, the Steelers scored 19 fourth quarter points, with the final Steeler points coming on a Najeh Davenport one-yard run with 8:39 left, but the Jags had one last shot, and were able to do enough to pull off the win.

The play in question was a 4th-and-2 that saw Jags QB David Garrard pull off a QB sneak in which he took the ball down inside the Steelers 15. There was a clear hold on the play on LB James Farrior that wasn’t called, and one short Josh Scobee field goal with :37 seconds left spelled doom for the Steelers in a wild setback to end their season.

A game that might not go down as a classic was a memorable one for Steeler Nation, as for close to three quarters the team played like it just wanted to go back home, trailing 16-0 with just over 17 minutes left in the game.

Instead it was one of the most spirited comebacks in team history, as they scored 17 points in the fourth quarter, 14 points in the last 2:23 as they rallied for a win that put the team at the time at 7-2-1.

The second TD saw the Steelers get the benefit of a couple calls, but in the end from the one it was Roethlisberger on a rather ugly sneak getting in scoring on a play that of course was reviewed, and the officials confirmed it was a good touchdown, giving the Steelers the stunning win.

Day After Thoughts: The Run Game, Jaguars Week, Give Ben a Break?
Could a Different Back be the Answer to the Struggling Steelers Run Game?