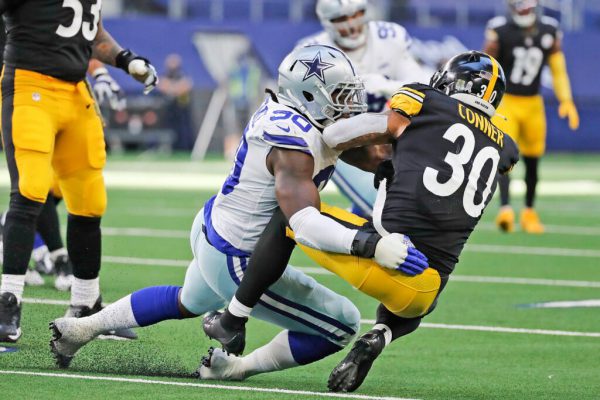 Let me start this piece by saying one thing – I am a fan of James Conner.

The Steelers workhorse running back has rushed for 556 yards this season, and when the team needs a yard he’s the player the club turns to.

He’s also been a model player in the locker room as well as on the field, never complaining and always putting his best effort forth even when he’s not 100 percent.

That’s why this statement isn’t easy for me to make.

It’s time to give someone else a shot to fix this run game.

From Benny Snell Jr. or Anthony McFarland Jr., it’s maybe time for one of these two players to see a game where one of them gets 15-20 carries, a number that Conner has seen six times this season, but not since the 28-24 win over the Ravens a few weeks back.

Mike Tomlin says that the run game isn’t something that’s the fault of the running backs, and that it’s all about everyone coming together, from the backs to the offensive line to even the wide outs.

“One of the things I’ll acknowledge is you always go through lulls in a season when components of your play are lacking,” Tomlin said Tuesday.

“It requires a re-center of energy or attention. I believe that’s where we are in regards to the run game. We’ll get about that task this week.”

I get it, they are in a lull, and maybe this week against the Jags is the week they finally get back on track.

And it could still be Conner that gets the team on track, but for whatever reason it just feels like it’s time to give someone else an opportunity.

People seem to forget that Snell, when given 19 carries in the opener against the Giants, ran for 113 yards, showing that he can get the job done.

As for McFarland Jr., he’s the unknown in this whole running back saga, but in the case of carries, when he got six carries against the Houston Texans he did put up 42 yards, and with his speed it would be interesting to see what he could do.

As the team enters week 11 they are 24th in the league in rushing yards per game and 27th in yards per carry.

The last five games has been tough to watch them rushing the ball, but Tomlin says they will find a way to get past it and be successful.

“We’re not up to snuff,” Tomlin said. “We’re going to roll up our sleeves and resolve it.”

They had better. As great as Ben Roethlisberger has been in 2020, they can’t count on him throwing for 330 yards each week and a run game that produces 40-50 yards.

Expect to see that run game start to be even a bigger focus this week.

But it could be with a different look and a different name on the jersey getting the ball.

Seven Memorable Games In the History Between the Steelers and Jaguars
Day After Thoughts: Steelers Early Favorites Over the Ravens, TE McDonald Set to Return This Week