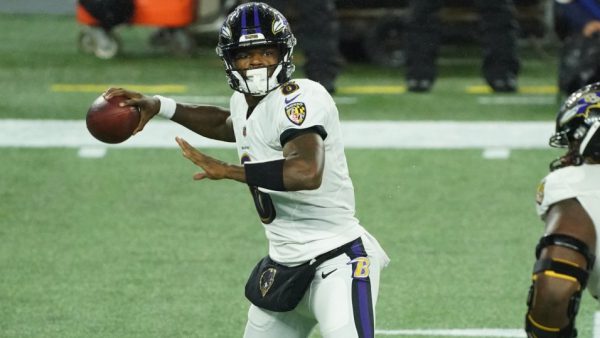 Monday afternoon a lot of Steelers fans on social media were downright giddy when word came down that the Ravens would be minus two of their top running backs for Thursday’s key AFC North showdown at Heinz Field.

The immediate assumption is that the Steelers, who enter the game looking for a knockout blow of their biggest rival, now enter the game with a firm advantage due to the fact that both J.K. Dobbins and Mark Ingram both have to sit after testing positive for the covid-19 virus.

Baltimore will not only be minus two of their running backs, but also Ravens defensive tackle Brandon Williams has been placed on the covid-19/reserve list as well.

The Ravens, who have dropped two straight and three of four, are now on the outside looking in sitting at the 8th spot in the AFC in terms of the playoffs, meaning if the season ended today, they would be making early vacation plans.

That’s why when you look at the situation for Thursday’s game one thing is very clear – the Ravens may just be more dangerous than ever.

Yes, Baltimore is a wounded animal, and as they enter Heinz Field they will approach it with the attitude that they are playing for their playoff lives, despite there being five more games left in the season after Thursday’s affair.

Ravens coach John Harbaugh will no doubt have a speech ready to go that will inspire as well as motivate, and he will play up the “us against the world” moniker for the prime-time showdown.

With Dobbins (113 yards in the first game) and Ingram (no carries in the first game) both out, the run game will fall on the capable shoulders of Gus Edwards, a player who carved through the Steelers run defense for 87 yards and 5.4 yards per carry in game one.

The Steelers can’t underestimate Edwards or the Ravens run game minus Dobbins and Ingram, as Edwards has rushed for 373 yards, a 4.4 yards per carry average, and four scores.

He can get the job done, and despite the Steelers having the 7th ranked run defense, Baltimore found gaping holes in the first game that John Riggins, even at 71 years old, could have run through.

The focus of the Ravens offense will fall on Edwards as well as quarterback Lamar Jackson, who in the first meeting went just 13-for-28 for 208 yards with two touchdowns and two picks and two lost fumbles, including a not so great pass on the games final play.

Jackson’s arm won’t be the focus of Baltimore’s offense, it will be his legs and feet, as this season he’s rushed for 575 yards and three scores, including 65 yards in game one against the Steelers.

The Steelers have laid out the last two weeks the Bengals and Jaguars, two teams with a combined mark of 3-16-1. They’ve done what they are supposed to do against two sub-par teams, and now it’s back to the grind against a rival they have a chance to lay a knockout blow against in a big way.

One thing they can’t do Thursday is think for one second that the Ravens game will in anyway be easy. They have had some of their most physical games over the last 24 years against Baltimore, and while the run game might be at a disadvantage Thursday, they still have a defense that will look to get to and harm Steelers QB Ben Roethlisberger.

Mike Tomlin has been a master motivator in this bizarre 2020 season in not letting the Steelers let their guard down.

Thursday is now not a time to let it happen with a chance to all but lay to rest the AFC North and possibly even the postseason chances of the one team the black and gold don’t want to see come the postseason prior to a likely game (if they make it) in the AFC Title game against Pat Mahomes and the Kansas City Chiefs.

If the Steelers give the Ravens any life come Thursday night, it will be their fault, as they have it all lined up to get to 11-0 and even more importantly keep the top spot in the AFC with six weeks to play.