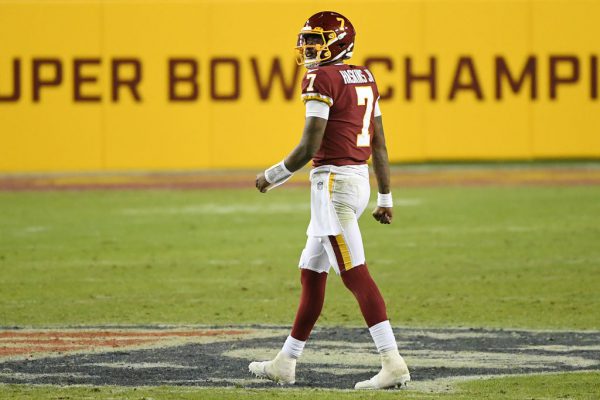 It doesn’t sound like the Steelers are staying pat with just waiting for Ben Roethlisberger to make up his mind officially playing in 2020, as the team has brought in former first-round pick of Washington quarterback Dwayne Haskins.

Haskins was dumped by WFT with one game left in the regular season and the team setting up for an ‘all or nothing’ game against the Eagles, which they won to clinch the NFC East.

In 2019 Haskins was the 15th overall pick in the draft. He showed signs of promise at the start of his career, throwing for 1365 yards, seven touchdowns and seven picks.

This season he just wasn’t very good, going in a bad sophomore slump. He carried a QB rating of 30.7 and threw for 1439 yards with five touchdowns and seven interceptions.

Haskins got in trouble with the team off the field as well, as pictures of him at a strip club not wearing a mask were released.

With Mason Rudolph and Josh Dobbs as the only two QB’s on the roster outside of Roethlisberger, expect the Steelers to bring in plenty of throwers this offseason to try and figure out their future at the QB spot.