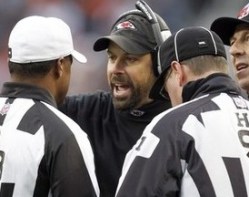 In a signing that surprised many (as some thought his interview was a courtesy move), the Pittsburgh Steelers have signed Todd Haley to be their new offensive coordinator.

On the bright side, Haley was fantastic at pushing wide receiver Larry Fitzgerald to be great. He challenged him on the physical aspect of his game and the work ethic, Fitzgerald loved his style, and football fans everywhere loved the results. Fitzgerald has since started holding summer workout camps. He got a 1000-yard season out of Steve Breaston in 2008, too.

On the other hand, you can look at the Cardinals‘ offensive numbers and wonder how they didn’t score more in 2008 and 2009, particularly when they ran the ball so well in 2009. Kurt Warner called many of the plays in Arizona.

Essentially, what makes this a decent hire is that Haley does have a lot of experience attacking defenses, and working under a great head coach in Bill Parcells back in Dallas. He’s also worked with inconsistent line play for Big Red and the Chiefs, and with two of the least mobile quarterbacks in the NFL, Kurt Warner and Matt Cassel. To truly assess the job he did in Kansas City, you need to evaluate all the injuries – Charles, Cassel, Baldwin – and what Herm Edwards left him with. This is probably the best hire the Steelers could make, looking at who was available.

More recent posts:
Jay Cutler and Rex Grossman Team Up (and Lose) With Those Trying To Shut Down Super Bowl
Rex’s Mouth May Have Kept The Jets From Victor Cruz
The Miami Dolphins Are the Only Real Choice for Peyton Manning
Jerome Bettis Does Not Belong in the Hall of Fame

Steelers Free Agents for 2012 – Who Should Stay and Who Should Go?
Steelers Create Cap Space by Renegotiating Woodley’s Contract