100 Things Every Steelers Fan Should Know Before They Die: #29 John Henry Johnson 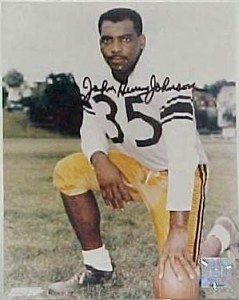 This summer, my first book dedicated to the Black and Gold book will be coming out in stores entitled “100 Things Every Steelers Fan Should Know Before They Die.” The book, which is being published by Triumph Books, will be available in all major book stores and will retail for $14.95. We will have ordering info through Amazon as soon as it becomes available.

In the meantime, through the offseason, we’ll give Steelers Gab readers a sneak peek of some chapters of the book. Today we highlight one of the greatest running backs the team ever had, but rarely gets talked about – chapter 29 – John Henry Johnson. Enjoy!

Before the days of Franco Harris, Jerome Bettis and Willie Parker, the Steelers real first workhorse back was a 210-pound fullback named John Henry Johnson. He was the clubs number two draft pick in 1953, but didn’t actually play for the Steelers till 1960, as he started in Canada, where he was the MVP in just one season, and then played for the 49’ers and Lions before finally landing in the Steel city.

He was known as a great blocker in his day, and also had soft hands which also made him a dangerous pass catcher out of the backfield. He was truly a fullback in a halfback’s body, able to use both speed and power to become of the best backs and one of the most underrated in NFL history.

Johnson also was a great pass catcher as stated above. He caught 32 passes in the 1962 season for 262 yards and another score. In his six years with the Steelers, he had 106 catches for 814 yards. Johnson seemed to be all about firsts, as he was the first player in a Steelers uniform to rush for 200 yards in a game. On October 10th, 1964 against the rival Browns, Johnson rushed for 200 yards on 30 carries, as the Steelers pulled off a major upset at the time, beating the then powerful Browns 23-7. He was just the 9th player all-time as of that time to put up 200 yards or more in a game rushing.

His career wrapped up in 1966, playing 14 games for the Houston Oilers, rushing for 226 yards. In his six seasons with the Steelers, he rushed for 4381 yards on 1006 carries, an average of 4.4 yards per carry average. He’s still highly regarded as one of the best Steeler backs of all-time, fourth all-time on the most rushing yards list behind just Franco Harris, Jerome Bettis and Willie Parker.

When he retired in 1967, Johnson was 4th all-time among rushers in pro football history, and he finally got his due as one of the best backs in NFL history in 1987 when he was elected to the Pro Football Hall of Fame. He was behind just Jim Brown, Jim Taylor and Joe Perry in the all-time leading ground gainers in NFL history. He ran for 6,803 yards on 1,571 carries, putting up 4.3 yards per carry.

Johnson will always be remembered as one of the great Steelers of all-time. He was chosen as one of the best Steelers in history from 1933-1970 along with Bobby Layne, Ernie Stautner, and Bill Dudley. He also was named one of the 50 most significant Bay Area Sports Figures of the Century in the Alameda newspaper.