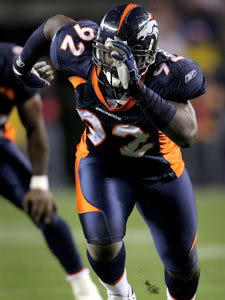 The Denver Broncos have released outside linebacker, Elvis Dumervil after a huge problem between the team and his agent on Friday. The Broncos tried to restructure Dumervil’s contract giving him $8 Million this year instead of $12 Million. However, the Broncos front office tried getting this done in the last hour possible, and didn’t get the job done. Leading to the release of Elvis Dumervil. In result, Dumervil fired his agent, Marty Magid, and hired Tom Condon and Ben Dogra to move forward. Now that one of the premiere pass rushers is out in the open market, he is expected to be a big demand for teams. The race is on with four teams reportedly interested in Dumervil. Those teams are: The Steelers, Ravens, Patriots, and Titans.

The Steelers released linebacker James Harrison prior to the start of free agency. The team and Harrison could not agree on a restructured contract that would keep him on the team for the 2013 season. In result, they parted ways with Harrison and created space in the salary cap. The Steelers are under the cap, but have little wiggle room to sign a player like Dumervil. However, the Steelers are highly interested in Dumervil, and we may see more restructured contracts and/or players getting released to create more space for the 2013 salary cap. The Steelers are not high on outside linebackers Jason Worilds and Chris Carter as of yet and are looking for an accomplished pass rusher like Dumervil to step in. Dumervil had eleven sacks last season, ranking second on the team behind Von Miller (18.5). How good are the Steelers’ chances of landing Dumervil?

The Baltimore Ravens are also in a cap situation after making quarterback Joe Flacco the highest paid player in NFL history. The Ravens have had to watch Paul Kruger, Carey Williams, and Dannell Ellerbe go in free agency without really being able to put up a fight. The team released safety Bernard Pollard, and have not re-signed Ed Reed as of yet. Rumors are saying that the Ravens are also interested in former Steelers linebacker, James Harrison. If the contract talks get too out of hand for the Ravens to snag Dumervil, look for them to put an offer on Harrison.

The Patriots and Titans are the other two teams that have reportedly created interest in Dumervil. Along with the Broncos watching how the situation goes. They have not sparked as much interest into the linebacker as the Steelers and Ravens, but if they can dish out the money, they may be able to pull him in. The Patriots have been rather quiet during free agency, and have drafted pass rushers in the past couple years in the NFL Draft. This may push them away from signing the prow bowl linebacker.