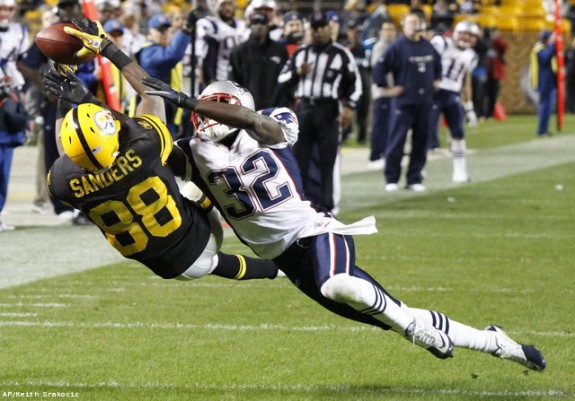 False reports were reported last week that the New England Patriots gave Steelers’ restricted free agent wide receiver Emmanuel Sanders an offer sheet to make him a Patriot. Those reports as I said, were false. Steelers GM Kevin Colbert quickly came out and said that Steelers haven’t gotten an offer sheet from New England for Sanders. Meaning that Sanders is still a restricted free agent for the Steelers and has not signed his tender as of yet.

Now to mix in with the Patriots rumors, Indianapolis Colts Owner, Jim Irsay, claims that he has something up his sleeve. Many are believing that this could be to get Sanders. Now I should say this: The Steelers have not received an offer from the Colts neither. Teams have one week before the NFL Draft to send in an offer sheet to sign a restricted free agent. If a team was to sign Sanders, then they would have to give up a third round draft pick to the Steelers. Which that may be a fair deal. Sanders has only played in all sixteen regular season games one time in his career. The Steelers are expected to draft a receiver or two in April.

Sanders has posted a picture of him and receiver Antonio Brown on his Facebook page down in Miami where the two receivers are training together with some other receivers. Rumors have also been reported that if the Patriots would release receiver Brandon Lloyd, then we would see a push by them to get Sanders. A week has passed since they released 31 year old Lloyd, and no reports have been made about a potential offer sheet since the first one was proven false.

Right now things seem to be quiet on the Sanders front while NFL advisors, owners, and coaches spent the week in Pheonix for their annual meetings. We will keep you posted if anything happens between Sanders and an offer sheet. Right now, all is good for him staying with the Steelers. Have a great weekend everybody and keep checking back in for more Steelers news!

Rumors That Steelers Will Meet With Brian Urlacher
A Return To The Steelers Lining Up For Harrison?