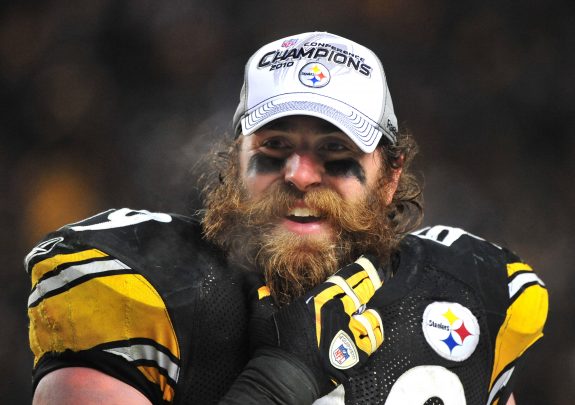 The Pittsburgh Steelers have been fairly patient so far in testing the free agency waters.  Brett Keisel, the starting right defensive end and eight-year starter has yet to be contacted by the organization.  Although he will be 36 in September, Keisel has been a defensive captain and was rated the 13th defensive end for the 2013 NFL Season (in 3-4 defenses) in pass rush evaluations around the league.  While the Steelers wait and see, Keisel, an unrestricted free agent, will prepare for the possibility that he will be playing outside of Pittsburgh.

Eric Metz, Keisel’s agent, said on Thursday, “(Brett is) productive, healthy and has every intention to continue to play football.”  In an interview in January, Keisel was forthcoming about his desires to stay in the NFL.  When he was asked if he will return to the Steelers in 2014, Keisel said, “That’s really up in the air right now. I want to continue to play for as long as I feel that I can, and I feel like I can still play.”  The indication may be that Keisel is prepared to play elsewhere if he is contacted by another team.

The loss of Keisel may be a necessary evil due to salary cap issues for the Steelers despite him being ranked 13th in team history with 29 sacks.  During the 2013 NFL Season, Keisel missed four games with a plantar faciitis issue in his left foot as well as a tear, but was able to return in the final two games of the season.  In 2013, Kesiel made $2,825,000 in base salary, with a salary cap charge of $4.9 million.  It is likely the Steelers will want to negotiate to a veteran minimum closer to $1 million and add a small signing bonus.  Whether Keisel will accept that or shop his wares around is yet to be seen.

“Hopefully, he can finish his career a Steeler as he’s always desired,” said Metz.

Keisel credited Joey Porter as one of his mentors in the interview mentioned above.  With Porter returning to Pittsburgh as a defensive coaching assistant, some may feel that the connection between the two men may factor into a decision to convince Keisel to remain in Pittsburgh – but it is speculation at this point.

The Steelers also face the possibility that their other starting defensive end, Ziggy Hood, who is also a free agent, could depart.

Other defensive ends currently on the Steelers’ roster:

Defensive ends brought in on futures contracts: None

You can follow Christina’s work here on SteelersGab, on Facebook, via Twitter @3Rivers_Writer  and Google Plus.  Christina Rivers has been a freelance journalist, writer and photographer for over 20 years with a vast range of personal experiences. Credentialed with the Pittsburgh Steelers, her work has been featured on Examiner.com as well as CBS Sports, CBS Sports Local, KDKA in Pittsburgh, ‘The Beam’ in Pittsburgh, If It Ain’t Steel, SteelBlitz Steelers blog, SteelersDepot and more. She has written over 10,000 individual pieces of work and continues to add photographs to her growing portfolio.