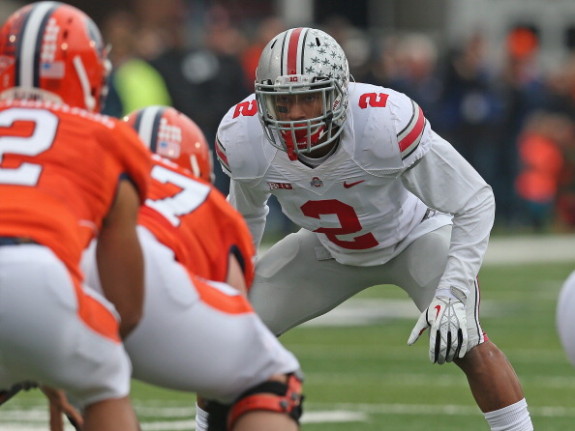 Prepped in Florida. Originally committed to play for Urban Meyer at Florida, but Meyer resigned. Shazier then signed to play for Jim Tressel at Ohio State, but Tressel resigned five months later. Wound up playing for Luke Fickell for a season, then reunited with Meyer his final two seasons in Columbus. Played all 13 games in 2011, starting the final two at weakside linebacker, and recorded 57 tackles, five for loss and three sacks with two forced tackles and a blocked kick. Started all 12 games played at WLB in ’12, registering 115-17-5 with 11 pass breakups, an interception touchdown and three forced fumbles. Was a Butkus Award finalist in ’13 after he led the Big Ten in tackles and tackles for loss — started all 13 games at WLB and racked up 134-22.5-6 with four pass breakups and four forced fumbles. Team captain joined James Laurinaitis, A.J. Hawk, Chris Spielman and Pepper Johnson as Buckeye linebackers to lead the team in tackles two consecutive seasons. Did not run or work out at the NFL Scouting Combine (left hamstring).

Highly productive, disruptive playmaker vs. the run and pass. Shoots gaps and plays behind the line of scrimmage (compiled 39.5 TFL the last two seasons). Agile to slip blocks. Quick, strong hands to shed. Knifes gaps and flows very well laterally. Striking tackler — uncoils on contact. Excellent speed and range — opens up his stride in space and really covers ground. Bends naturally. Changes direction and accelerates with ease. Explosive first step as a pass rusher — shows the ability to dip, bend and run the arc low to the ground. Ample athleticism and flexibility to mark backs and tight ends. Led all players at the combine with a 42-inch vertical jump and blazed a sub-4.4 40 time at his pro day. Four-down utility. Arrow is pointing up.

Lacks ideal size and bulk. Still developing eyes and instincts — will diagnose and trigger more quickly down the road. Gets caught in traffic or engulfed by larger blockers when he hesitates to step downhill. Prone to overaggressiveness — occasionally overruns plays or loses cutback contain. Could stand to improve his eyes, awareness, anticipation and reactions as a zone defender. Took some time to acclimate before making an impact.

The Big Ten’s leading tackler, Shazier flies around the field and his unique athletic ability stands out. Offers a tremendous combination of speed, tackling and coverage skills to become a playmaker as a run-and-hit 4-3 Will or perhaps a 3-4 weakside ‘backer if protected by a block-occupying nose tackle. Value is increased by the fact that he will not have to come off the field.

Clowney, Ebron and Gilbert off draft board for Steelers
Steelers select Ohio State linebacker Ryan Shazier in first round of 2014 NFL Draft