A Look Back: Noll, Otherwise Known As “The Emperor” Takes Over the Steelers 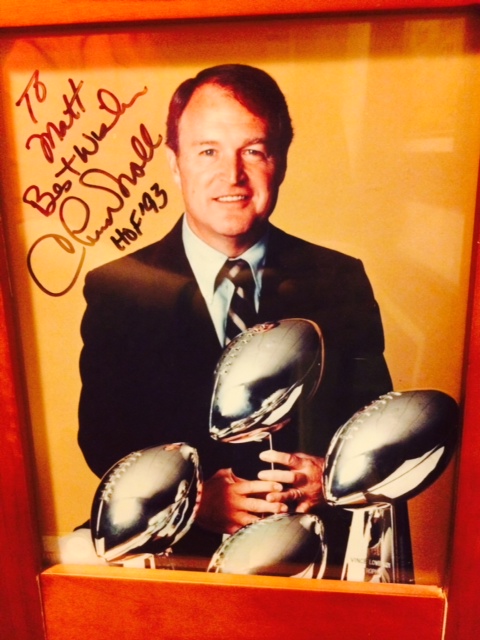 The death of Steelers HOF coach Chuck Noll has shaken Steelers Nation, and tonight we honor the coach by revisiting the chapter I penned on him in my Steelers book released by Random House in 2010 – “100 Things Every Steelers Fan Should Know and Do Before They Die.”

Noll’s chapter was chapter #2 – trailing only late owner Art Rooney in regard to importance to the franchise.

2. The Emperor Takes Over the Steelers

When Charles Henry Noll took over the Steelers as their head coach in 1969, owner Art Rooney was hopeful that this new voice for his team could eventually guide it into being a force in the NFL. Never did even he expect that Noll would become the legendary coach to lead the Steelers to four Super Bowl victories. But in the end, that is exactly what Noll did.

He is the only coach in NFL history to lead a team to four Super Bowl titles, as the Steelers won Super Bowls IX, X, XIII, and XIV. He did it by getting the most out of his players by paying attention to detail, as well as picking players who fit the Steelers’ system of superior defense and offensive running.

Noll was never a rah-rah type of coach, as was his successor, Bill Cowher, who took over after Noll retired in 1991. But the one thing that most of his players always said about him was that they never wanted to let him down.

Players were prepared under Noll, and it showed in the way they systematically dominated teams year in and year out.

From 1972 to 1984 Noll’s teams never suffered a losing season. In that stretch, the coach led the Steelers to a run that most NFL franchises have never seen: four Super Bowls, four AFC conference titles, nine AFC Central titles, and a record of 130–58 in the regular season and 15–7 in the postseason. Then, of course, was the fact that under Noll the Steelers had a legendary defense that struck fear in the hearts of opponents.

Noll’s coaching credentials began as a player for the Cleveland Browns. After he left the game as a player in 1959, he became an assistant coach for the Los Angeles and San Diego Chargers and then the Baltimore Colts. While with the Colts, Noll took over the defense, and in 1968 he helped them set an NFL record for fewest points allowed in a season, with 144. The following season, he was ready to take over the Steelers.

When Noll came in, the Steelers had had only four winning seasons in 19 years, and had won only 18 games in the previous five. The one thing that Noll did was commit to the draft. He started with the drafting of Joe Greene, and from there he brought in big-name talent to build his dynasty.

After a 1–13 season Noll’s first year came Terry Bradshaw, then Franco Harris. The 1974 draft continues to go down as one the greatest in NFL history. Lynn Swann, John Stallworth, Jack Lambert, and Mike Webster all joined the team, four Hall of Famers in one draft year, which has never been done before, and almost surely will never happen again.

Noll was the brains behind the teams that won four titles, as he was able to make smart decisions and motivate his players with his wit and game-planning. As a coach, Noll never got the attention and media coverage he deserved.

It wasn’t until he led an overachieving team in 1989 to the playoffs, going 9–7, and then helped them pull off an upset of coaching rival Jerry Glanville and the Oilers on New Year’s Eve in the AFC wild-card game that he garnered any amount of media accolade. It was Noll’s last playoff win.

Two years later he left the Steelers. With the same quiet demeanor and charm that he used in coaching the team for 23 seasons, Noll left his post as “the Emperor” and rode off into the sunset with a coaching mark of 209–156–1, including the postseason.

He was elected to the Pro Football Hall of Fame in 1993, his first year on the ballot. He still holds the ceremonial title of administration adviser in the Steelers’ front office but does not have a role in the team’s operations—just the way you would think Noll would want it after a career that put rings on players’ fingers and trophies in the front office of the organization.

You can order the book through Amazon and Borders, or if you want an autographed copy for that someone special (or just for yourself), email me at Matt@NFLGridironGab.com and I will let you know how you can get one!