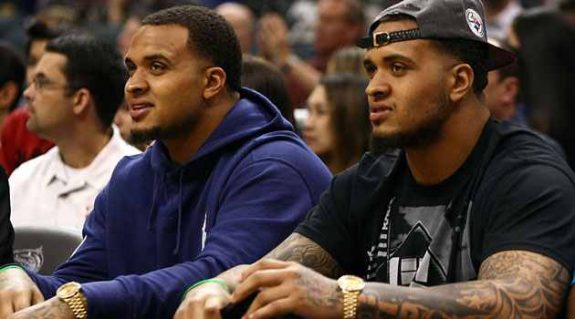 The Pittsburgh Steelers may have a situation on their hands if allegations are proven correct that Pro Bowl center Maurkice Pouncey and his brother Mike Pouncey were involved in an assault on Friday night.  The assault allegations came as a result of the twins were celebrating at a Miami Beach night club for their birthday according to the Broward Palm Beach Post.

The night club, Cameo, is the same location where the twins were noted for wearing “Free Fernandez” clothing in support of Aaron Hernandez who was accused of killing semi-pro player Odin Lloyd in June 2013 and also of killing two men in Boston in June 2012.  Hernandez has been suspended from the NFL.  Their apparel started a firestorm on social media and among media outlets about their support for “a killer.”  Hernandez was a college teammate of the Pouncey twins.

Allegedly, Ricky Vasquez was the man assaulted.  He turned to Twitter and Instagram to share his opinions about the incident that also occurred with bouncers at the club.

I just got jumped by 4 bouncers and the Pouncey Twins at Cameo. I’m going to press charges. My face is swollen

The alleged victim also posted some videos on Instagram  in order to plea his case that he was not only assaulted but that hateful statements regarding sexual orientation were used.  He also alleges that a female friend was assaulted as well.  Following commentary on Vasquez’s Twitter and Instagram accounts, he stated that he didn’t know that “stuff like this actually (explitive) happens to people.”  “All I can remember is standing in a crowded club and this big guy keeps hitting me in my back,” wrote Vasquez.  “I look at him and I’m like, OK, he’s obviously turned up.  And he just keeps hitting me.  I ignored it.”  Vasquez goes on to say that “Honey” tried to break up the in-your-face incident but was “punched” by one of the twins in her face and then he was also punched.  Allegedly this was before security arrived.  Later, Vasquez says that he required stitches, had a swollen face and lost a tooth.

No comment has been made by either Pouncey twin, their agents, the NFL or their respective teams.  The incident is likely under investigation.  Once we have more information, we will post it.  Until then, the twins are presumed innocent.

This would not be the first time that NFL players have been accused of crimes in the public.  If the Pouncey twins are indeed involved, it could result in criminal charges and possible action by the league.

Between the Hashmarks: July 11 transcript
Black and Gold Links Of The Week: July 13, 2014