Steelers vs Eagles: The Key Game For Both Teams 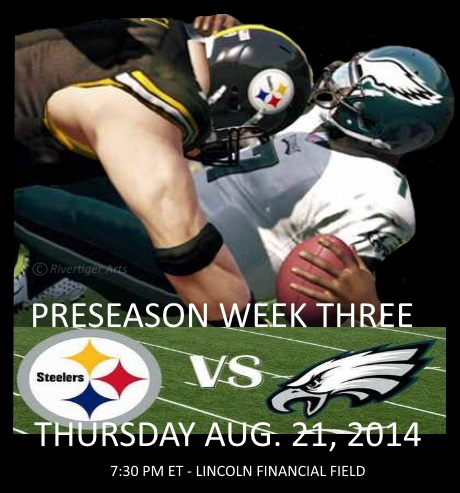 The Pittsburgh Steelers will be squaring off against the Philadelphia Eagles, Thursday, in the most important preseason game between the two teams. Both teams’ starters will play the entire first half; possibly some of the 3rd quarter.

The Pittsburgh Steelers first offense looked impressive last week vs the Buffalo Bills.  Ben Roethlisberger will be tested against the many blitz schemes the Eagles use. The main pass rushers to keep an eye on will be linebacker Connor Barwin and  LB/DE specialist Trent Cole. Left Tackle Kelvin Beachum will be tested early and often by Cole.  Running back Le’Veon Bell will carry the ball around 10-15 times against the Philadelphia Eagles front seven which has struggled against physical running teams recently. Big and physical running back LeGarrett Blount is also expected to see extensive action. Being that Blount is the number two back, he may play some into the 3rd quarter as well. Concerning the passing game wide receiver Markus Wheaton will be looking to develop more against the Eagles secondary as well as wide receiver Antonio Brown, who will be tested against corner backs Fletcher Bradley and Cary Williams.

The second  and third team offenses have been lackluster the past two weeks, mostly due to poor quarterback play from Bruce Gradkowski and Landry Jones. A key player to watch is rookie offensive linemen Wesley Johnson as he plays some snaps at center aiming to show his ability to play multiple places on the offensive line. Backup center Cody Wallace will miss the game due to a knee injury. It will be interesting to see which tight ends and wide receivers emerge as the top backups for the Steelers against the Eagles linebackers and secondary.

The Steelers Defense Vs The Eagles Offense:

The talk of the Steelers defense the past week has been rookie linebacker Ryan Shazier. The talk of the Eagles offense is quarterback Nick Foles. Foles and Shazier will see plenty of each other. Shazier will be expected to blitz Foles on multiple occasions. Wide receivers Jeremy Maclin and Riley Cooper will match up against cornerbacks Ike Taylor and Cortez Allen. It will be interesting to see how the Steelers defense reacts to the fast-paced offense that Philadelphia head coach Chip Kelly runs.

The Steelers’ defensive front seven will be tested against all purpose back LeSean MCcoy who could very well touch the football 20 times. The second and third team units are worth keeping an eye on. The Steelers linebackers position has been in deep competition. Also, there is a backup battle brewing at quarterback for Philadelphia between Mark Sanchez and Matt Barkley . Also in Chimp Kelly’s offense, the third receiver receives much playing time and one from the group will be looking to stand out with the limited time they have. The man to watch in that group is wide receiver Jordan Mathews who possesses good size and great speed.

It’s clear by now that Steelers fans are eager to see offensive weapon Dri Archer return a punt or kickoff to see what he can do. The Steelers are still looking to find a punter for week one. The man they hoped to become the guy was Adam Podlesh, but Podlesh has chosen to remain away from NFL play.  That means Brad Wing will most likely do the punting duties this week for Pittsburgh. The guy to watch returning kick and punts for the Eagles is return specialist and speedster, running back Darren Sproles.

Although Brett Keisel has been re-signed by the Steelers, he is reportedly not playing in Thursday’s game.