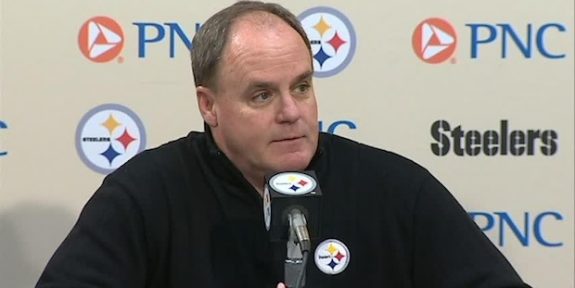 On Tuesday, Pittsburgh Steelers General Manager Kevin Colbert held a conference with select members of the media at the practice facility to discuss meetings the team will have over the course of the next few days regarding discussions with franchise quarterback Ben Roethlisberger on a contract extension, approaching unrestricted free agents within the organization and who they may target once that period begins.

Steelers President Art Rooney II stated that speaking with Roethlisberger would be a priority for the team during the offseason.  Colbert revealed that talks have begun.  “(Roethlisberger) is entering (the final year of his current contract)…I can say that we have begun discussions with him.  There is no timetable on it.  It could happen quickly.  It could take a little while.  As I have always said, when you have two parties who are real interested in getting the same goal achieved, it usually goes quicker than not.”

“I think Ben is a franchise quarterback who is getting better with age,” said Colbert. “You have seen it with a couple of great players who are still playing in Peyton Manning and Tom Brady. Their games have certainly not deteriorated. I really think Ben is going to be a better quarterback down the road than he has been up to this point. I think that’s his goal, too.”

2014 was Roethlisberger’s eleventh season in the NFL.  The soon-t0-be 33 year-old had statistically the best season of his career, tying New Orleans Saints quarterback Drew Brees at the top of the league in passing yards (4,952) while posting a career-best 408 completions out of 608 attempts, a 67.1 completion percentage.  Roethlisberger threw 32 touchdown passes, tying his career-high, and threw the fewest interceptions (nine) than any prior season in which he played in all 16 regular season games.

Colbert affirmed that the team is focused on surrounding Roethlisberger with the personnel that will help him be successful on the field.

NFL Films Founder Ed Sabol Passes Away At 98
New contract or not, Ben can be better in 2015