Odds Of Free Agent Steelers OLB’s Coming Back in 2015 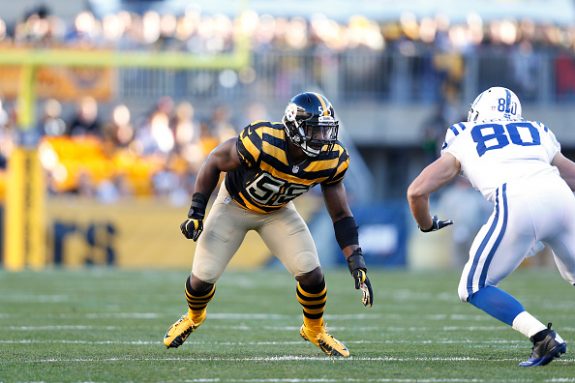 The Steelers could find themselves with a major problem on their hands, one that isn’t exactly a favorable one for a team that is looking to take the next step and repeat as the AFC North Champs in 2015.

The club has three outside linebackers, all of which who are free agents and could potentially be gone once the free agency period hits – Jason Worilds, Arthur Moats and James Harrison.

These three players were key components to the Steelers in 2015, and right now the only OLB that is on the roster that is a for sure to return in 2015 is Jarvis Jones, who despite being a first-round pick has been inconsistent in his time with the black and gold.

Today we take a look at the three free agents, and give our opinion on which ones will or won’t be back with the opening day roster in 2015.

Jason Worilds – 2014 Cap Hit $9,754,000 – GM Kevin Colbert announced this week that the team is going to allow Worilds to hit the free agent market, which if history means anything tells you he won’t be back. He’s 26, and he’s shown enough to earn a solid contract on the free agent market. He’s going to get interest, and one team that’s been rumored to like him is the Philadelphia Eagles. The Steelers want him back, just doesn’t look like it’s going to happen unless the market is a lot softer than it appears to be.

Arthur Moats – 2014 Cap Hit $635,000 – Moats was quietly a very good offseason pickup last offseason for the Steelers playing mostly on the right side and playing in all 16 games, putting up four sacks and forcing two fumbles. He seemed to love the system and while it will be a lot quieter than if the team brings back either Worilds or James Harrison, Moats is a player that payed off for the team in 2014, and they need to bring him back. He’s also 26, and worth a 2-3 year deal with the Steelers.

James Harrison – 2014 Cap Hit $$534,412 – Does anyone at this point believe that Harrison WON’T be back in 2015? Anyone see the videos that he’s been posting of his offseason workouts? Sure we along with a lot of other sites jumped the gun with a bogus report last week about a supposed one-year deal between the Steelers and Harrison, but I for one am still convinced that he wants to play and he wants to do it for only one team in 2015 – the Steelers. A deal will happen, before he even hits the free agent market.

Video: Where Will the NFL’s Top Free Agents End Up in 2015?
Too soon to predict Steelers draft board