Cooper: How the Steelers Are Viewed in the UK 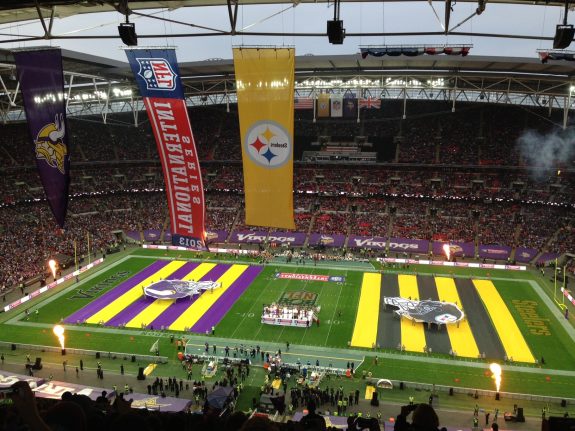 Due to the International Series, the Pittsburgh Steelers have a strong fan base in the UK. Over the past few years  football has become a popular sport in England and they even have their own American Football League.

The most interaction English sports fans get with American sports is through sitcoms such as Fraiser, the Simpsons and Everybody Loves Raymond. Now, most people are aware of the sport through Sky Sports. The legacy that the Steelers have is something that is already known to a lot of UK-based fans.

On the Friday just before a game, one of the busiest high streets in England, Regent Street, is taken over by a rally of English fans and a sea of black and gold can be seen every year with people sporting their favorite Steelers players on their backs.

David Andrews from County Down, Ireland has been a fan of football since 2005 from watching various Super Bowls and playing Madden on the Play Station; he has been hooked since then. So far Andrews has attended eight games in the International Series, including the 2013 game when the Steelers were narrowly defeated by the Minnesota Vikings.

The game lived up to his expectations, “(The Steelers) came across as exactly what I thought they would be. They were tough, business like and despite the team going through a bad period at that time, it was evident they had a strong will to win.”

Violet Horvath from Saltaire, England is a recent NFL convert and only started to watch the sport after  flicking through television channels. “I’ve never really been much of a sports fan but when I heard the noise that the Steelers fans were making, I decided to watch for a few minutes and now watch a Steelers game when I can. I like the passion that (Ben) Roethlisberger plays with.”

Edmund Davies from Bradford, England is new to the game and has only followed football for two seasons but already sees himself as a lifelong Steelers fan. Already a fan of various American sports, Davies decided to watch a few Steelers games.

“My friend is an American Football fan so I had already heard of a few teams, but I remembered the Steelers because of the Super Bowls they’ve won, so when I saw on TV that they were playing I watched the game. They took big hits that I’ve never seen before and they just carried on, it was impressive.”

England will certainly welcome the Steelers back with open arms the next time they visit Wembley Stadium.

How The Steelers’ 2015 Schedule Could Affect The Draft
Cover One: Will The Patience Be Worth It For Steelers