How Do the Steelers Plan on Replacing Departed Veterans on Defense? 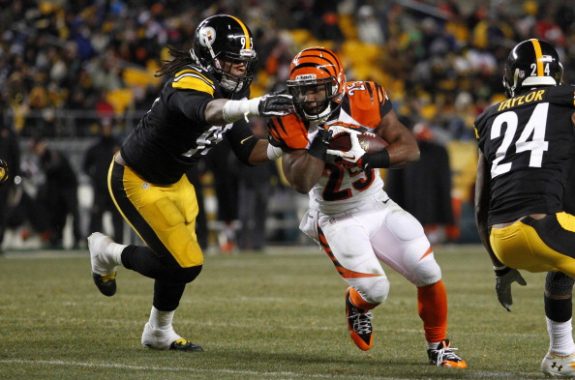 The Steelers defense has had a big offseason of transition, starting with the departure of longtime veteran defensive coordinator Dick LeBeau, replacing him with linebackers coach Keith Butler.

The team though lost a number of defensive veterans due to retirement, and NFL Network’s Chris Wesseling and Marc Sessler broke down just how those vets are going to be replaced and how much of a challenge it may be for the black and gold on defense in 2015.

The most daunting task will be to replace two defensive starters that retired, outside linebacker Jason Worilds and safety Troy Polamalu, both of which were not expected back in 2105.

“You’ve got Jarvis Jones who was a former first-round pick, who has been a disappointment to date, due to injury and ineffectiveness, and another disappointment in Shamarko Thomas who is expected to take over for Troy Polalmalu, he has been unable to get off the bench for two years,” Wesseling said.

Sessler is under the opinion that replacing isn’t exactly as important as possibly doing things another way once the club lines up in Butler’s first season calling the plays on defense.

“I don’t think that you can ask someone to come in and replace the shoes of a Troy Polamalu, that’s absurd,” Sessler said. “But it’s about shifting what they do on defense, maybe attacking opponents a little bit differently.”

One player that Sessler says don’t put on the back burner yet is veteran OLB James Harrison, who inked a two=year deal to return to the team this offseason.

Harrison was rumored to be seeing less playing time in 2015 according at one-point to LB coach Joey Porter, but Sessler says he can’t see that happening, at least not right away with the Steelers.

“They talk about James Harrison who at this point is like 47 years old having reduced snaps, I honestly don’t buy it,” Sessler said. “He’s probably going to start coming out of the season until some of these younger players come into form.

“Bud Dupree in the first round, I want to know if he will be one of the rare Steelers rookies to see more playing time out of the gate, that’s rare for a rookie on defense in Pittsbrugh.”

The Steelers defense in 2014 allowed 353.4 yards per game, 18th in the NFL and not good enough to complement an offense that is one of the best in the NFL last season.

If the Steelers are going to win the division for a second straight season and this time make it past the wild card round of the playoffs, their defense in transition will likely be the biggest reason they get there or not.

Cover One: Steelers looking for next premier pass rusher
Roster battles will heat up for Steelers during OTAs