Steelers Gab Player of the Game: Week One, DeAngelo Williams 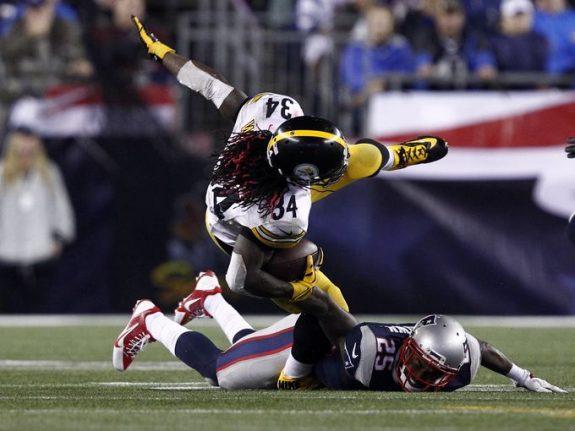 Despite a 21-28 loss to the New England Patriots on Thursday night – the opening of the 2015 NFL regular season – the Pittsburgh Steelers have to be happy with the performance of running back DeAngelo Williams.  A ton of talk about how the Steelers would do without top rusher (in 2014) Le’Veon Bell floated the circuit until Williams took his first few handoffs from Ben Roethlisberger in a game that should have gone Pittsburgh’s way had the score been based solely on offensive performance.

Williams may not have scored in the match that saw the Steelers record 134 total rushing yards in 25 plays, but he racked up 127 of those pieces of ground.  Williams showed the ability to not only read the defense, but utilize the blocking of the offensive line to find holes to burst through.  Around the edge, the Patriots had trouble bringing Williams to the turf, proving that Pittsburgh will definitely have a one-two punch in the running game once Bell does return.  His longest rush went for 28 yards.

Williams added one catch for five yards in the game.

Posting a 100-yard (plus) game in his first regular season outing with the Steelers illustrates what an intelligent move it was for the Steelers to bring him in during the offseason.  In fact, it is possibly the best offseason transaction in the past two seasons.

Will Allen – eight tackles (one for a loss) and a sack

Ben Roethlisberger – completed 26 of 38 passes for 351 yards and a touchdown (one interception) for a QB rating of 95.4