Bengals Can’t Get Inside Head Of Steelers’ Mike Mitchell 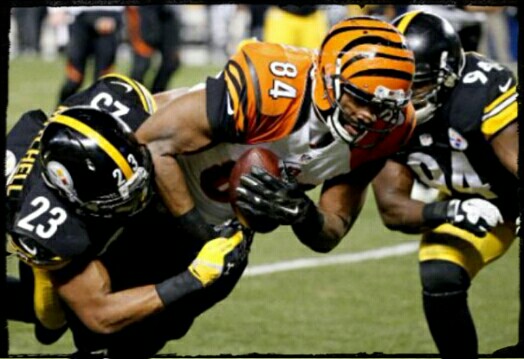 NFL players like to get into the heads of their opponents.  Psychological warfare ahead of a gladiator battle.  Bengals receiver Marvin Jones expressed his lack of lost love for the Steelers earlier this week to ESPN by saying, “It’s going to be bloody on both sides…we expect that.”

Jones was the recipient of a legal but crushing blow by Steelers safety Mike Mitchell when the Steelers hosted the Bengals at Heinz Field.  A.J. Green got heated over the hit, exchanging pleasantries with Mitchell; Green giving the impression the hit was a cheap shot.

On Thursday, Mitchell did an interview with the Beaver County Times.  He was relatively quiet about any rivalry or negativity towards the Bengals – until he was informed of Jones’ statement.  With all seriousness intended, Mitchell offered, “We won’t be the ones bleeding.”

Cincinnati is in the way right now with Pittsburgh determined to not only win, but split the 2015 series and secure a better position in playoff seeding.  The Bengals want the sweep and AFC North title.  With Baltimore out of the picture this season, these two teams have turned up the heat in recent games against each other.

The Steelers lost Le’Veon Bell in the last two games against the Bengals (2014 and week 8).  First, it was Reggie Nelson and then Vontaze Burfict inflicting the wounds.  Steelers teammates were incensed over what they believed was an intentional maiming of Bell by Burfict and celebratory attitude.

Love/Hate – Mitchell returns to Ohio confident and not willing to give the Bengals the satisfaction of head games. He and his Steelers teammates want to simply shut the Bengals up by beating them on the field and the scoreboard.