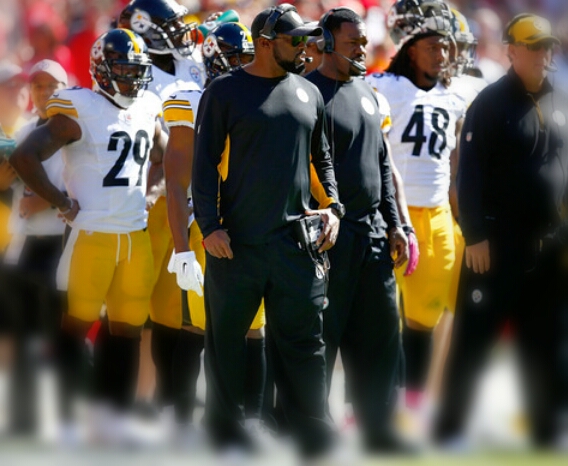 Pittsburgh Steelers head coach Mike Tomlin met with the media today as usual for Tuesdays talking about the week nine game agaisnt the Raiders. He also talked about the upcoming AFC North game against the Cleveland Browns. Here are three keys to his conference:

Game plan around what quarterback?

“We are evaluating Ben Roethlisberger. He is continuing to be evaluated today. We will leave the door ajar for him. But it’s just slightly ajar. I think it’s prudent that we anticipate playing without him and preparing to play with Landry Jones. I know that’s what we are thinking right now as a staff as we prepare. We will let Ben go through his process and will continue to communicate with Ben and our medical staff. But from a planning structure standpoint, much like it was a couple of weeks ago, we are preparing to play with Landry. We are also preparing to get Mike Vick ready. We will see where Ben’s health is.”

This is concerning for several reasons.  With Roethlisberger out earlier in the season, both Mike Vick and Landry Jones struggled to run the offense.  At this point in the season, those two guys have no reason not to understand the play book or how to get on the same page with their teammates.  If they won’t, the Steelers will lose.  It is relatively simple to see that the defense can not carry this team and score enough points for a win.

Planning for McCown … but maybe Manziel?

“We are anticipating and preparing to defend Josh McCown. Johnny Manziel has played some but when you look at the tape it’s obvious that Josh is their guy. His tape and his statistics show that. He’s done a good job for them this year. He is the No. 1 passer in the NFL on third downs. I think he has a quarterback rating of plus-130 on third downs. So possession downs are going to be big. We didn’t do enough on possession downs a week ago. We have to do more on possession downs in this game. We have to prepare for the change that would occur if Johnny would play. They are some subtle changes. We will prepare accordingly. But the vast majority of our preparation will be geared toward defending and minimizing Josh and what he does. Both guys are extremely mobile and are capable of creating. I think their play selection reflects that mobility in both guys. They consciously move the pocket with misdirection passes. But both guys are capable of creating and ad-libbing as normal play structure breaks down. We’ve seen them both do it. We have to be prepared to minimize what both guys are capable of creating in those instances. We have to rush hard and smart.”

Tomlin’s right that the Steelers defense needs to rush smart. Oakland hurt them most when too many guys showed early they were pulling out of coverage. A little less ad-libbing would be smart.

As for preparing for one QB over another – the Steelers should focus on the Browns offense overall. McCown and Manziel will be doing what the Steelers are – trying to get their beat up offenses to move. Focusing on guys like tight end Gary Barnidge, Isaiah Crowell, Travis Benjamin and Andrew Hawkins will eliminate opportunites for plays regardless of who Cleveland sticks behind center. Game plan to eliminate weapons and the defensive rush should work just fine.

“(The Browns defense) are capable of covering and applying pressure. Oftentimes you can characterize them as schizophrenic, but I say that in a good way, in that they give you a lot of things to prepare for. But it’s not about them, it’s about us. We have to continue to work to find a formula that’s a winning one in spite of some of the changes that we have faced from a personnel standpoint.”

The Steelers’ preparation for a mentally challenging, difficult to read defense starts with the offensive line.  Cody Wallace can’t ignore the snap count this week.  They have to get off their blocks clean, limit penalties and keep the lanes open for DeAngelo Williams and Jordan Todman to rush through. The line has got to pull together and keep Jones and/or Vick protected and comfortable.  If they can foil early pressure from Cleveland, maybe they can create a breakdown that gives Pittsburgh the edge.