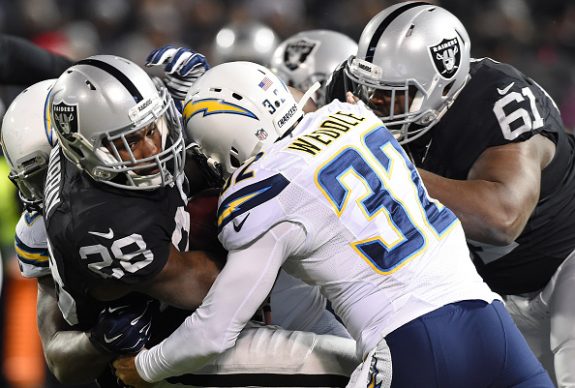 For the first time in what seems like forever, the Steelers appear to be a team that is going to have cap space to go out and try and find a player (or two) to fill their roster to make another run at a Super Bowl in 2016.

The team reached the AFC Divisional Round this season with a banged up crew that rivaled no other team in the league. They took the now Super Bowl bound Denver Broncos to the limit with a banged up QB, a third and fourth string running back, a beat up offensive line missing players, and without their top wide out.

With that they shouldn’t just assume that they can get healthy and in 2016 they will be able to just throw their helmets on the field and reach the Super Bowl.

They lost two games to the awful Ravens, and there was times this season they lost other games they should have won (the Bengals game at Heinz Field comes to mind).

So what players should the team focus on in free agency? There’s a couple names that right away come to mind, and one that keeps popping up is Chargers safety Eric Weddle.

He’s an unrestricted free agent that will be free to sign with anyone, and with a chance to stay in the AFC and be on a Super Bowl contender. Let’s not forget he’s a hard hitting safety that can make plays and would be a huge asset to the Steelers defensive backfield.

Since being a second-round pick of the Chargers in 2007, Weddle has 19 interceptions, 5 forced fumbles, 4 touchdowns, 71 pass deflections, 6.5 sacks and 849 tackles.

He making the shift to strong-safety while Mike Mitchell mans free safety would help the Steelers defensive backfield big time.

Another player that could give the black and gold a monster lift is cornerback Josh Norman, who still has another game to play for the Super Bowl bound Carolina Panthers.

He’s going to demand top dollar on the market, and he may be out of the Steelers range if they add a safety like Weddle, but with money coming off the books, Norman would be unreal lining up at corner next season and beyond.

So when you’re taking in super bowl commercial 2016 during the big game in two weeks in San Fran, keep an eye on Norman, and get ready for what should be an interesting offseason filled with hopeful moves that will get the Steelers to their 7th NFL Championship in 2016.

Steelers Player Profile: Tajh Boyd
Rooney Talks Salary Cap and Signing Players: “We Will Have Work To Do”