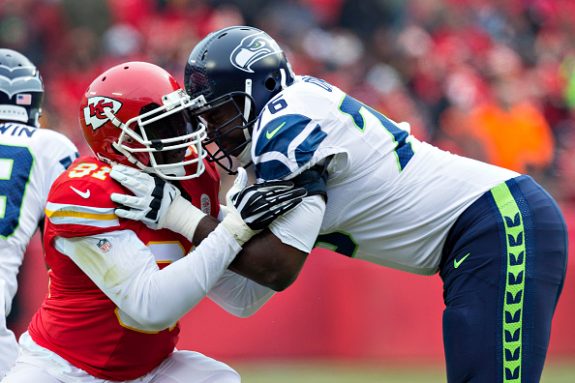 While the Steelers may have to figure out how to make up for wide out Martavis Bryant should he wind up suspended for the year as reports say, the team looks like they may try to add to their offensive line.

Per ESPN’s Jeremy Fowler, the Steelers have an offer on the table to Seattle Seahawks offensive tackle Russell Okung.

Per @JFowlerESPN, the Pittsburgh Steelers have an offer on the table to Russell Okung. Seahawks LT has also met with Giants, Lions.

Okung was the Seahawks 6th overall pick in the 2010 NFL Draft. He’s played in 72 games in career, starting them all. The Detroit News reports that Okung had a good visit with the Lions on Saturday, and he’s also chatted with the Giants.

If the Steelers do land Okung, it will mean the end for Kelvin Beachum, who has spoken to the Jets and Jaguars, and also ESPN reported the Seahawks have shown interest in the tackle.