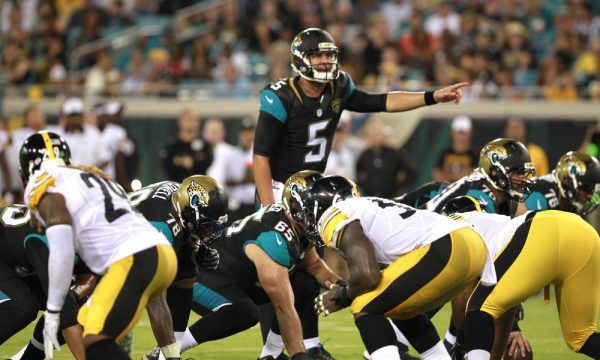 The 2018 Steelers Playoff Revenge tour will start next Sunday at Heinz Field, as if the black and gold want to make it to the Super Bowl, they will have to beat one, and most likely two teams that beat them in the regular season.

First up will be the Jacksonville Jaguars, who beat the Steelers 30-9 back in week five in the famous game in which Ben Roethlisberger threw five picks, and after the game said mockingly that maybe he didn’t have it anymore.

That loss in week five dropped the Steelers to 3-2, and they didn’t lose again until week 15 when the officials stole a win away from the Steelers in a home loss to the Patriots, the team they probably will have to play in the AFC Title game in two weeks in Foxboro.

Back to the Jagaurs, the Steelers will catch the Jags after they beat the Buffalo Bills Sunday 10-3 in a snoozer in Jacksonville, a game that saw just one touchdown, a Jags fourth down TD that gave them the only six of the game.

Other than that, it was the Jags defense doing enough to stop a hobbled LeSean McCoy and in the final minute they knocked out Bills QB Tyrod Taylor.

The Jags offense struggled last week in the regular season finale scoring just one touchdown, and that was on defense, and now today they scored just one TD again, this time on an 8-minute drive to win the game.

It seems to be lining up for the Steelers and Pats once again in two weeks, but remember if there’s one team other than the Pats that seem to have the Steelers and more so Big Ben’s number, it’s the Jaguars, so we will see how things play out next Sunday at 1:05pm.

Since drafting Ben Roethlisberger in 2004, the Steelers have a losing home record against two teams (including playoffs).