100 Things Every Steelers Fan Should Know Before They Die: #37 – The Bus Arrives in the Steel City 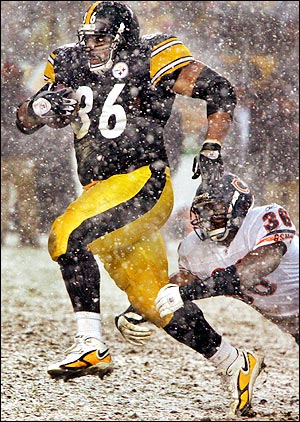 Two months from now, my first book dedicated to the Black and Gold book will be coming out in stores entitled “100 Things Every Steelers Fan Should Know Before They Die.” The book, which is being published by Triumph Books, will be available in all major book stores and will retail for $14.95. It is currently available for pre-order through Amazon and Borders, and is set to arrive in stores on September 1st.

Through the offseason, we’ll give Steelers Gab readers a sneak peek of some chapters of the book. Today we highlight one of the greatest running backs the team ever had, but rarely gets talked about – chapter 37. The Bus Arrives in the Steel City.

The Steelers knew after the 1995 season that the run game was in a flux. The team had already said good-bye to Barry Foster the season before, and while they had some decent backs in Byron “Bam” Morris and Eric Pegram, there was that desire on the part of Bill Cowher and the front office to go out and get a back that would pound away and be able to wear down defenses.

The clubs leading rusher in 95 was Pegram, who came to the team in the offseason from the Falcons. He was a shifty back, but showed heart and ran hard, putting up 813 yards and five touchdowns, with an average of 3.8 yards per carry. Morris was the bruiser, a guy who would come in for those tough one-yard runs with the game on the line, like in that seasons AFC Title game when the team needed that final yard to go up for good against the Colts, 20-16.

Morris ran for 559 yards on 148 carries, nine touchdowns and an average of 3.8 yards per carry. Overall though Morris was a disappointment. He was expected to be the teams lead back that season, and as the team started 3-4, he was replaced by the smaller Pegram. Morris did come back and play better near the end of the year, but the team didn’t feel comfortable with him as the franchise back. Things became even worse for Morris when in March of 1996 he was arrested for marijuana possession. The Steelers knew the time to act was now.

The club seemed to have interest in a running back in Los Angeles by the name of Jerome Bettis. He had fallen out of favor with then head coach Rich Brooks, and after going for 1429 yards his rookie season, had dropped to 637 yards and three touchdowns in 1995. Brooks had also said some not so flattering things about Bettis, calling him lazy. The issue was is Bettis was in a system not meant for him. They wanted to throw more, and Bettis simply wasn’t in their plans.

So the teams began talking about a trade that would send Bettis to the Steelers. The asking price – the Steelers 2nd round pick that season along with their 4th round pick in 1997. The Steelers also in return got the Rams third round pick. The premise for the Rams was they wanted to draft troubled running back Lawrence Phillips, and they really wouldn’t need Bettis as he would ride the pine.

As the two teams kept speaking, it became evident they both felt that it was a deal that could be made. The Rams took Phillips, and that opened the door even more for Bettis to be moved. The move was made, and the Rams ended up taking tight end Ernie Conwell with the Steelers 2nd round pick, and the fourth round pick ended up being moved to the Jets, who used it on wide receiver Dedrick Ward, who played for five teams in his NFL career before becoming an assistant coach.

Bettis fit the Steelers offensive gameplan like a glove. The team released Morris, who eventually pled guilty to drug possession, leaving Bettis and Pegram as the two main running backs on the roster. Pegram started the season as the number one back, but by the Steelers third game of the season, Bettis quickly took over. He ran for 133 yards and two scores in a Monday night win over the Bills, and it set the pace for the big back to have a big season, and a big career.

The Bus, as he is so well known as, ran right into the hearts of Steeler Nation. He ran for over 1,000 yards in each of his first six seasons with the Steelers between 1996 and 2001. He also went to the Pro Bowl four times as a Steeler, was the 1996 NFL Comeback Player of the Year, and was the 2001 Walter Payton Man of the Year.