Time For Tomlin To Be Held Accountable For Lackluster Road Losses 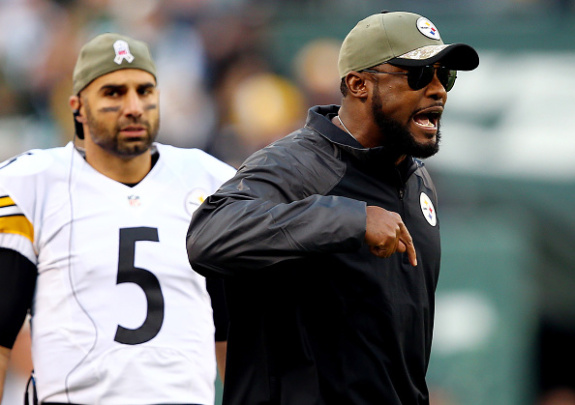 He’s run the show since 2007, patrolling the sidelines for an organization that prides itself not only in winning, but winning titles.

Mike Tomlin has had some high moments, like winning Super Bowl XLIII just two years into his reign as Steelers coach. He also won an AFC Title with the club in 2010, but the team fell short in the biggest game of the year, losing to the Green Bay Packers in Super Bowl XLV.

Since that fateful night in Dallas, the Steelers though have been under the radar more than ever, and the team has never been able to reach the heights under Tomlin it did in his first four years on the sideline.

The last four seasons has seen a disturbing trend, a trend that has seen the team more or less “play down” to the competition, and once again on Sunday it happened, losing to the 1-8 New York Jets 20-13 at MetLife Stadium.

The road losses to inferior teams have become more and more frustrating, from failing to beat a bad Raiders team in 2013 in Oakland with Terrelle Pryor at QB, to a 2009 loss to the rival Browns on a Thursday night 13-6, when the Browns were 2-11.

So why can’t this team step up and beat the doormats of the NFL when called upon? It’s mind boggling, and it’s time for Tomlin to have to step up and start to answer the questions.

The Steelers looked like an AFC powerhouse in beating the Texans, Colts and Ravens the last three weeks, and the national pundits quickly jumped on the bandwagon of how good this team was playing.

Then, as fast as they started to play well, the bottom dropped out against an aging Michael Vick and a skinny Rex Ryan.

Make no mistake, the Jets are not a good football team, and with quotes from Tomlin today trying to be curt to the media about the loss at this point fall on mostly deaf ears.

“You play for 60 minutes and so forth. Bottom line is we didn’t do what was required to win today. We didn’t secure the ball, we didn’t get the ball. It’s not winning football,” Tomlin said.

The coach failed to answer a question asking as to why the trend of losing on the road to bad teams keeps happening, instead blaming the four turnovers on the latest setback.

“If you look at the history of the NFL and you’re minus four in the turnover ratio you have strong possibility of losing,” Tomlin said instead of answering the question.

His words are starting to really annoy Steeler Nation, and while there’s not a chance on earth the Rooney’s are going to get rid of Tomlin, the coach has got to find a way to get this team better on the road.

The club will play yet another bad team in the Tennessee Titans next Monday night, and again it’s on the road.

The team just two seasons ago went to Tennessee on a Thursday night, with the Titans sitting at 1-4. The outcome – a 26-23 loss.

Now at 6-4, a loss in Tennessee next Monday not only will stop the talk of playoffs, but should make the Rooney’s think long and hard about the future of their head coaching position.

For now, Tomlin needs to take a hard look in the mirror as to why this club can’t beat bad teams on the road.

Steeler Nation sure has had enough of it.

Tomlin’s Tailspin of Bad Road Losses with the Steelers