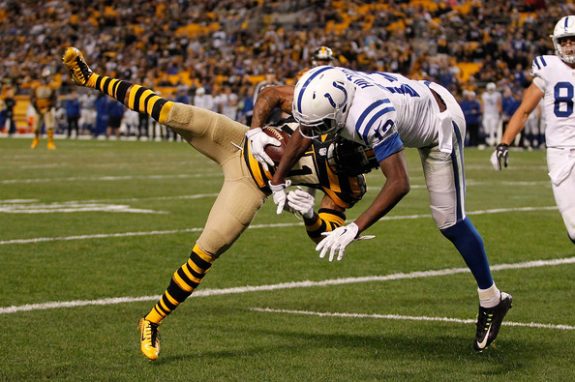 The Pittsburgh Steelers would be foolish if they haven’t realized by now that they have some serious concerns at the cornerback position.  While I am not convinced that the Steelers will be able to snag a cornerback in the first round of the 2015 NFL Draft, I am convinced that Pittsburgh will definitely sit down and have a serious talk with Antwon Blake and Brice McCain during the offseason.  Between those two players, a total of 67 tackles, one fumble and four interceptions were recorded for one touchdown and 18.7 yards after the interception.

On Tuesday, McCain spoke about his role with the Steelers in 2014.  “My personality, I am a fighter,” said McCain.  “I felt like if I came in and competed, this team will give you a chance to play.  My feeling wasn’t wrong.  I came in, competed and fought hard…It was a productive season for me and the team.  It was a stepping stone for the team.”  McCain’s best performance during the 2014 season was during a 27-17 victory over the Cincinnati Bengals that secured the AFC North title for Pittsburgh.  McCain recorded two interceptions.  McCain would love to remain in Pittsburgh and continue to help the Steelers, including working with Blake.  “I was fortunate to be the guy to come in and help this team with Blake…(the Steelers) gave me an opportunity and I appreciate it.”

Blake spent a lot of time on special teams before being inserted into the Steelers’ defense.  “My mindset is…I want to be a wrecking ball.  I feel like nobody can stop me,” said Blake.  “If somebody gets in my way, I have to move them.  I have to bowl through them.”  As for his time at the cornerback position, Blake said, “I want to emerge as someone who is in the lineup consistently and ultimately become a starter and show the world what I can do.  I want to help my team any way I can.”

Defensive backs coach Carnell Lake considered Blake’s performance in 2014 one that he liked due to his speed and aggressive play.  Blake, a former safety for the Jacksonville Jaguars, feels best at the cornerback position.  “Carnell Lake is someone I was a fan of growing up,” said Blake.  “It’s kind of a dream come true to be coached by someone like him.  It’s easy to listen to him.  It’s easy to understand what he is saying and believe what is coming out of his mouth because I saw him do the things he is asking of us. It’s a great feeling to know you are being coached by somebody with that pedigree and background.”

With NFL wide receivers getting more height, vertical leaping ability and long, lanky bodies, strong corners have become a necessity.  NFL Network analyst DeAngelo Hall was reported by Mike Prisuta of Steelers.com of saying that he does not believe speed is the most important characteristic of a pass-coverage player.  “I think that’s the biggest misconception in this league as a corner is that everyone has to be a 4.3 guy, a 4.4 guy( in the 40-yard dash)…If you can run it helps you make mistakes and recover.  But if you have great technique and you want to compete, you have a change to be a great corner.”

With 57 free agents available from different teams, the Steelers could opt to supplement their defensive secondary with a mid-level corner like Buster Skrine, Robert McClain or Brandon Harris.  McCain had a cap hit of $635,000 in 2014.  Blake was at $570,000.  With a tight cap number, it would make sense to hang onto both players for 2015.

As for draft prospects, WalterFootball.com has 31 cornerbacks they have rated.  At the top of the list is Trae Waynes out of Michigan State.  With tall, quick corners a commodity for every NFL team, the Steelers would be highly unlikely to snag Waynes at number 22 in the first round.  That means Pittsburgh may need to wait until the second or third round and go for a mid-level cornerback like P.J. Williams (Florida State) at 6 foot, 194 pounds or Jacoby Glenn of Central Florida.  Glenn has good size at 6 foot, 179 pounds and is competent in man coverage.  As a redshirt sophomore, Glenn recorded 48 tackles with seven interceptions, 11 passes broken up and one forced fumble.  At the Scouting Combine, Williams posted a 4.57 40-yard dash time and  Glen ran just one tenth slower at 4.58.  Williams had a 3-cone drill score of 7.08 seconds and short shuttle time of 7.08 seconds with a 40 inch vertical leap.  Glenn ran the 3-cone drill in 6.97 seconds, the short shuttle in 4.26 seconds and the 60 yard shuttle in 11.97 seconds.

How the Steelers define their defensive backfield may come down to pro day visits as well as free agent talks.  One way or another, Pittsburgh will address the issue quickly or suffer against teams in 2015 that prefer to pass over churning up yards on the ground.