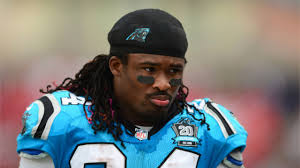 On a day when the Steelers announced they have inked franchise QB Ben Roethlisberger to a new five-year deal, the team also made their first official free agent signing, bringing in veteran running back DeAngelo Williams.

Excited about signing with the @Steelers! Trust me when I say that I've got a LOT of gas left in the tank…. pic.twitter.com/ktRb3NUZ5D

The deal isn’t much of a shock as Williams tweeted last night that he seemed confident he would be able to come to terms to joining the Steelers.

Williams was a mainstay with the Panthers, where he was the 27th pick of the 2006 draft. He has 6,846 career rushing yards and 46 rushing touchdowns. Injuries limited him to six games in 2014.

He will add depth to a backfield that could be missing star back Le’Veon Bell for the first two games due to suspension.

In his last healthy season, Williams ran for 843 yards and three touchdowns in 15 games in 2013.