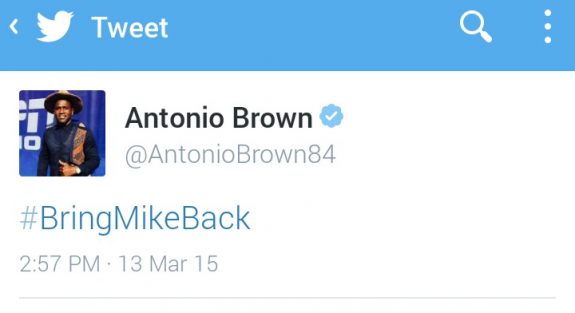 Pittsburgh Steelers wide receiver Antonio Brown began a Twitter campaign Friday afternoon aimed at getting the topic of bringing Mike Wallace back to Pittsburgh trending with little success.  His efforts were for naught when reports came out that Wallace was headed to Minnesota.

It isn’t shocking that there were mixed reactions to Brown’s Tweet.  Wallace left Pittsburgh after Brown was given the ‘sweet deal’, wanted more money and headed for the Miami Dolphins. 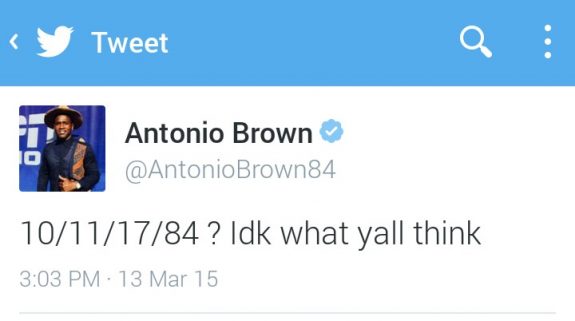 Brown’s second Tweet indicated the Steelers’ receiving corps should be comprised of himself, Wallace, Martavis Bryant and Markus Wheaton.

Although Wallace was Miami’s top receiver during the 2014 season, his $60 million contract (signed in 2013) must have tasted truly awful to the organization when Wallace melted down along the sidelines in a loss in Week 17 to the New York Jets.  They offered the Minnesota Vikings Wallace and a seventh-round pick, but received a fifth-round pick in return (for upcoming draft).  Miami traded for former New Orleans Saints receiver Kenny Stills making it clear that there was no love lost between them and Wallace.  Wallace was slated to make $9.9 million in 2015. It is unclear if the Vikings will negotiate with Wallace for a lesser payday.

With Pittsburgh and Miami, Wallace had plenty of speed. His inability to return to the ball when the quarterback was under pressure or tendency to outrun the pass forced critical errors.

Brown may have been petitioning for a friend and former teammate, but the Steelers didn’t show any indication they were interested in having Wallace back.