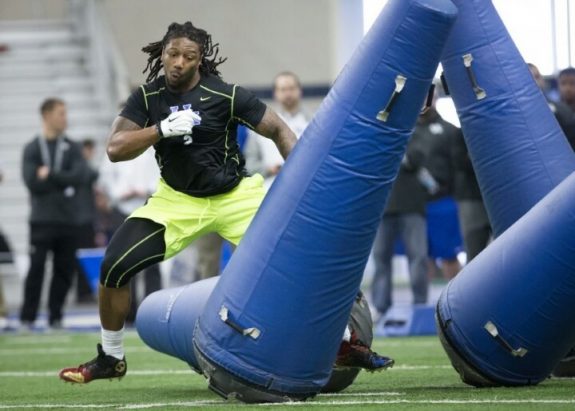 Bud Dupree became the third linebacker drafted in the first round by the Pittsburgh Steelers in the last three years. Dupree brings much excitement to the steel city as a  young pass rusher and run defender. Initially the perception is that Dupree’s versatility allows the Steelers to be very flexible on defense and should enchance the defense’s chances to create more turnovers.  Some scouts see Dupree as a project and some see Dupree as a instant splash playmaker on defense.

Dupree will have the privilege of learning from future Hall of Famer James Harrision.  Also, from a fan perspective  Dupree will be heavily rooted for to play instantly as many are beginning to lose faith in 2013 first-round pick outside linebacker Jarvis Jones.

At 6’4″, 269 pounds, Dupree will be a nightmare for tight ends, fullbacks and running backs to block in one on one situations.  Dupree also has the hands, and arm length, to play defensive end on stunt defenses such as two down linemen, 4-3 formations and the 3-4 defense playing with his hand on the ground as a edge rusher. It’s possible , depending on Dupree’s development  that he, outside linebackers Arthur Moats and James Harrison as well as inside linebackers Lawrence Timmons and Ryan Shazier could all be on the field at the same time with the purpose of rushing the passer.

Dupree must learn to cover in the mid secondary if he wants to become a Pro Bowl player. Dupree has the speed and size to match up with any tight ends in man to man in the NFL. Time will tell how quickly Dupree can understand route running in the NFL, and how he can adjust to double moves and pump fakes.

It’s vital that fans be patient with Dupree, especially considering the fact that many Steeler fans desired to see a cornerback drafted in the first round. In any defense if the pass rush is very good it will make even the average cornerbacks look good to great week in and week out.

Last season defensive end Stephon Tuitt came along slowly but picked things up toward the end of the season and now he looks to be a starter for the next ten years. Dupree could follow a similar path, or have a Kendrell Bell type of rookie season in which he makes a splash right from the start, being a 16 game starter and an intimidating presence.

One thing the defense lacks right now is a “mouth piece” Dupree could become that guy – the one who can talk it as well as walk it.  The ability is there. Time will tell if the mental aspect and dedication is there. If Dupree plays to his potential we could very well consider him a steal in this draft sooner rather then later.

(Note: Robert E. Smith, Jr., had Bud Dupree as the first-round selection for the Steelers in his mock draft)