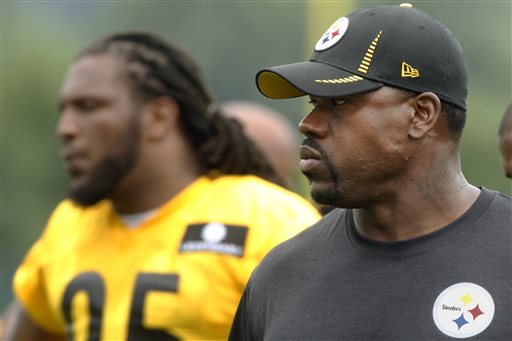 Although it is still early in the free agency period across the NFL, one thing that is becoming apparent is that the Pittsburgh Steelers are losing the identity they had during the 2014 season.  For many, this is a welcome departure from what was considered a defense not only in transition but in trouble.  A few surprises have created a completely different landscape and where the Steelers go will be closely watched as the team tries to put together a successful defensive squad over the course of the next few months.

With long-time defensive end Brett Keisel moving on, the uncertainty of whether the Steelers would take another look at aging linebacker James Harrison, a possible retirement by safety Troy Polamalu, the surprise exit of outside linebacker Jason Worilds from the NFL and cornerback Brice McCain‘s departure to the Miami Dolphins the Steelers have important voids that need to be filled.

The Steelers used their last two drafts to select younger guys to attempt to retool their defense.  With Jarvis Jones, Stephon Tuitt and Ryan Shazier, the Steelers got the youth but not the production they would have liked.  All three players have struggled with injuries.

The Steelers re-signed Cam Thomas at defensive end, but with Cam Heyward and Tuitt the only additional players at that spot, it wouldn’t be a surprise if Pittsburgh were to keep an eye out for at least one player at that position.

The Steelers are dangerously thin at outside linebacker.  After re-signing Arthur Moats, the Steelers have Jones as their only other option on the outside.  This could re-prioritize where Pittsburgh goes after a player in the draft, especially with available free agents at the position being a high commodity this offseason.

Justin Houston would have made a nice addition, but the Kansas City Chiefs placed the franchise tag on him.  The next highest-rated players at the position by WalterFootball.com are Sean Weatherspoon (left Falcons, signed with Cardinals), Justin Durant (left Cowboys, signed with Falcons) and Danny Lansanah (who re-signed with the Buccaneers).  Akeen Ayers, a DE/OLB with the New England Patriots is only ranked a two-star player by WalterFootball.com, but did help improve the Patriots’ run defense in 2014.

On the inside, the Steelers are five deep thus far.  With Shazier, Sean Spence, Terence Garvin, Lawrence Timmons and Vince Williams, linebackers coach Joey Porter will have plenty to work with.

Defensive backs coach Carnell Lake doesn’t have it quite so well.  With only three cornerbacks on the roster (Cortez Allen, B.W. Webb and William Gay), there is absolutely no doubt that the Steelers will have to address that position immediately.  Whether or not they will find someone in free agency or opt for the draft remains in the air at this point.  It would be safe to surmise that they would use both options.

Darrelle Revis was possibly the highest rated free agent at the corner position.  He left the Patriots to sign with the Jets.  Brandon Flowers, at age 29, re-signed with the Chargers.  Antonio Cromartie (Arizona Cardinals) was playing at a high level until a late-season ankle injury.  Kareem Jackson re-signed with the Texans and Byron Maxwell left Seattle for Philadelphia.  That leaves Tramon Williams (32, Packers), Chris Culliver (27, 49ers) and Parish Cox (28, 4ers) at the bottom of the top eight free agent rankings in the league (according to WalterFootball.com).  Williams is nearing the end of his career but had a decent 2014 season.  Culliver missed time with an ACL tear in 2013, but surrendered a 50.7 completion percentage against opponents despite having a decent year in San Francisco last season.  Cox has been mired in off-field issues and didn’t really take the field until 2014 causing many league insiders to wonder if he is worth the gamble.

At the safety position, the Steelers still list Polamalu on their roster but only have Mike Mitchell at free safety with Shamarko Thomas and Ross Ventrone at strong safety.  Polamalu has been, up to this point, expected to move on.  That creates yet another headache in a weakened defensive backfield.  Mitchell did not play at a veteran level in 2014.  Thomas and Ventrone have shown spark and promise, but many consider both to be untested as starters.

Among the top-rated safety free agents are Devin McCourty, Tashaun Gipson, Will Hill, Rodney McLeod, Rahim Moore, Da’Norris Searcy, Louis Delmas, Mike Adams and Dwight Lowery.  McCourty re-signed with New England and Gipson, considered one of the best young safeties in the league, was tendered by Cleveland.  Hill has been plagued with off-field issues and faced a six-game suspension for violation of the substance-abuse policy last season. McLeod is only 25 and despite his not being drafted out of Virginia in 2014, played good coverage for the St. Louis Rams and developed into a solid starter.  Moore had a scare when he developed lateral compartment syndrome and nearly lost his leg.  He had a decent comeback, but it wasn’t spectacular and he was not nearly as effective in coverage.  Searcy came into Buffalo and replaced Jairus Byrd in 2014 as a starter, playing well overall.  Delmas, at 28, has a history of injury and an ACL tear in December could hamper his placement for 2015.  Mike Adams re-signed with the Indianapolis Colts, effectively taking him off the board.  Lowery is considered a solid safety who has had a non-spectacular career, mainly due to an extensive concussion history.  Despite playing all 16 games in 2014 with the Falcons, he missed 20 games the prior two seasons.

ESPN’s Josina Anderson reported via Twitter that the Steelers may be interested in Saints free agent corner Patrick Robinson.

Robinson was selected late in the 2010 NFL Draft out of Florida State.  In six games started, Robinson recorded 39 (total) tackles and two interceptions.  The Steelers have not indicated that they will host Robinson this week.

The Steelers do have some futures players that may pan out for them, but at this point in the free agency period, the team has been quiet in the marketplace.  It would be unlikely that Pittsburgh would be able to completely retool their defense, especially the outside linebacker and defensive back positions via the draft.  That makes this offseason one to watch.