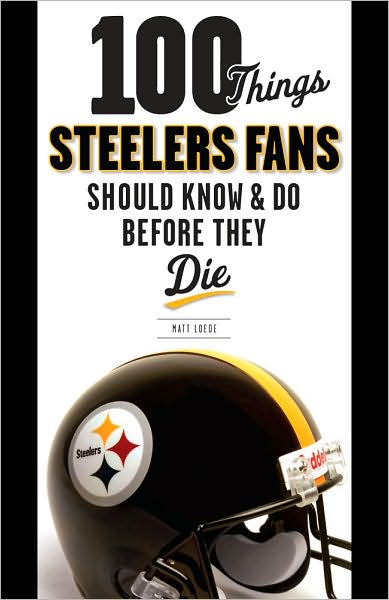 We are still running the contest for a signed copy of my first book out in stores in about two weeks – “100 Things Steelers Fans Should Know and Do Before They Die”.

All I am asking for in a few words, or a paragraph or two, is your favorite all-time Steeler moment. It could be a game, a party you were at, whatever. I have gotten some great responses so far. As promised, here are a few good ones:

This is from Bryan:

My favorite Steelers moment was taking my 7 year old son to see the steelers beat the broncos on Monday night football last year. He had a great time with both of us dressed in our steelers best. Proud father/son moment.

Another good one from Mark:

I have MANY favorite moments but my newest favorite moment is when the clock finally ran out on Super Bowl XL. I waited so long for that 5 ring to be in Pittsburgh and I never left my big screen and my living room the entire game. That was a great moment when I hugged my Sister and my best friend and fellow Steeler fanatic when the clock zeroed out!

Here’s one from Tony:

When I was married in 2004 to my wife Bonnie, one of her friends, former Steeler Rick Woods attended our wedding. The moment was sitting with Rick for nearly 2 hours during the reception talking Steelers football. He took me back to the early 80s and into the locker room. It was fascinating. To hear about Noll, Lambert, etc. Amazing. Even though it was only two hours, it was a lifetime of memories.

And a final one from Dwayne:

My favorite moment was when Bill Cowher was coaching. It was the game the refs. Blew a call for too many men on the field. We were playing the Minnesota Vikings. Well just before halftime Bill decided to place evidence of the blown call(via a picture) into the pocket of the referee. Oh and by the way my wife was converted that day on becoming a Steeler fan. Go Steelers!

Those are all great ones, and you never know, one could be the lucky winner! I will keep the contest going for another two days before announcing the winner, who will get a copy of the book autographed.

For those that want to pre-order the book, and at a discount, here are the links to the top book sellers out there:

Do me solid and get one for everyone on your Christmas list!!

So keep those memories coming, you can email me at Matt@NFLGridirongab.com with them, and we’ll put some more good ones out there as we close the contest on Thursday.