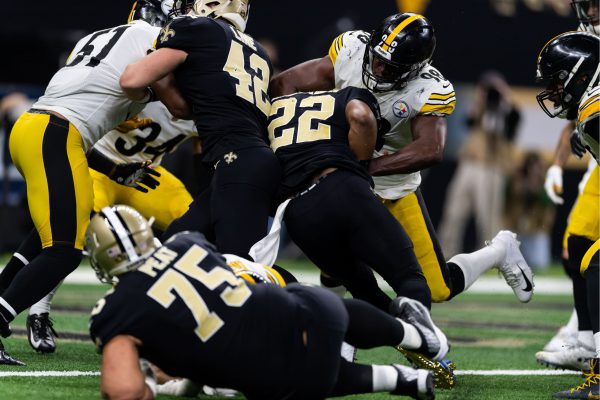 2. Question the Fake Punt, But I Liked It

With the Steelers sitting at their own 42-line and needed five yards for a first with about four minutes left up 28-24, Mike Tomlin rolled the dice in a huge way, going for a fake punt, which as we all know by now – failed.

Tomlin’s feelings was that the team had a good play set up for the fake punt, and also if the Saints did manage to score (which of course they did), that they would have enough time to move down and tie the game with a field goal.

The call was a run to Rosie Nix, and he got four yards when he needed five. What maybe was even more insane was the reaction by Nix, who thought he got the first down, running up and doing the ball drop as his fellow teammates celebrated.

One problem – he was easily a yard short.

While a lot of people and people were screaming about the call, let’s call it what it is, the Steelers D was playing well, and should have made the stop to win the game.

They also almost got the first down, and if they would have gotten it, they likely could have run the clock down to about the two minute mark, making a Saints comeback even harder.

Okay, the call didn’t work, but I for one like the aggressive nature and at this point in the season, you knew the way Brees was playing he’d pick his way down the field to win the game anyway.

Might as well put the ball in the hands of your players to win the game. It just didn’t work.