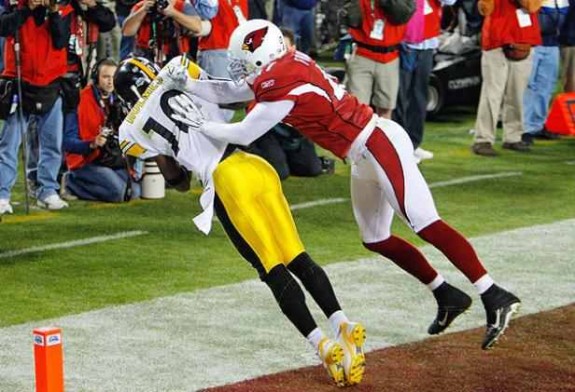 The Pittsburgh Steelers are one of the most stories franchises in the NFL.  On July 8, 1933, the Steelers emerged into the professional football world in the United States.  In celebration of the organization’s ‘birthday’, we take a look at five Steelers plays that will go down in NFL history (in no particular order).

The AFC Champion Pittsburgh Steelers faced off against the NFC Champion Arizona Cardinals in Tampa, Florida.  Pittsburgh finished the 2008 regular season with a 12-4 record while the Cardinals were seeking their first NFL title since 1947 (with a 9-7 regular season record).  Then former Steelers offensive coordinator, Ken Whisenhunt was the head coach in Arizona and many considered it to be a showdown between the Steelers and “Steelers West Coast.”

The Steelers were ahead 17-7 at halftime but the Cardinals scored 16 unanswered points with only 2:37 remaining in the game following a 64-yard touchdown reception by Arizona receiver Larry Fitzgerald.  The Steelers offense moved 78 yards down the field as time wound down on the game clock.  With 35 seconds left in the game, Pittsburgh wide receiver Santonio Holmes make a catch that was barely in the end zone.   Able to make the reception with his toes just in the end zone, Holmes touchdown reception sealed the game for the Steelers.  Holmes caught nine passes in the game for 131 yards, including four for 73 yards on the game-winning drive and was subsequently named Super Bowl MVP.  Holmes became only the third Steelers receiver to win the award (behind Lynn Swann and Hines Ward).