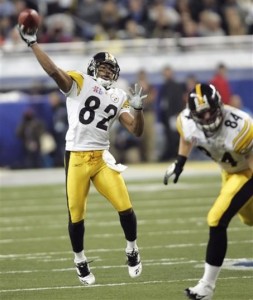 When Randle El took the ball, he faked the reverse and threw on the run to a wide-open Hines Ward on a deep crossing route.  “As soon as I let go, I was like, ooooh, catch it!” said Randle El.  “And Hines did.”  The play would ultimately be the play that would hold the Seattle Seahawks to a score of 10 to the Steelers’ score of 21.  Seahawks defensive backs Marquand Manuel and Andre Dyson had been anticipating another reverse – one that had been performed by Ward earlier in the game.  By honing in on that experience, Randle El was able to become the first receiver in Super Bowl history to throw a touchdown pass.